A trio of Indiana sired horses turned in a trifecta performance in the eighth race at Isle of Capri Pompano Park Monday, March 8. The claiming field was led to the finish by LA Rockin Sampson and Ken Holliday. 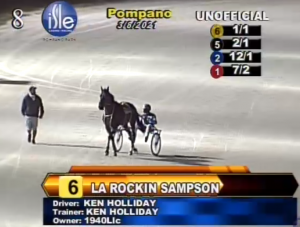 La Rockin Sampson left the gate with speed from the outside post six but had to settle for a garden spot trip as Manceiver and David Miller led the way through fractions of :26.4, :54.3 and 1:23.1. Around the final turn, Holliday moved La Rockin Sampson to the outside and he went right on by the leader.

However, as the late closers got into gear, Rockin Machine and Rick Plano were closing in late with every step, just missing the win by a nose which was awarded to La Rockin Sampson in 1:52.0. Sand Sniper and Wally Hennessey finished third. Both LA Rockin Sampson and Rockin Machine are sons of Rockin Image while Sand Sniper is a son of Sand Shooter to create the Indiana trifecta in the race.

La Rockin Sampson, also trained by Holliday, paid $4.00 for the win. The five-year-old gelding is owned by 1940LLC of Florida and was bred by Devon Slabach of Goshen, Ind. La Rockin Sampson now has three wins in 10 starts for 2021. His career best stands at 1:51.1 taken as a three-year-old at Harrah’s Hoosier Park. In all, he has 18 wins in 92 career starts with earnings now over the $115,000 mark.

La Rockin Sampson is the son of Sapphire Martini, who took a mark of 1:53.3 and earned in excess of $137,000 during her career. She has been a 100 percent producer in her career and has a yearling filly by Rockin Image named La Rockin Shania, who will be on the track in 2022. Other products of Sapphire Martini include The Truth Fairy (Total Truth, 2:01.3); La Always Amartini (Always a Virgin, 1:52.1) and J-S Lady Virgin (Always a Virgin, 1:59.0).

La Rockin Sampson was a $16,000 yearling purchase from the Hoosier Classic Yearling Sale. He has gone through several ownership changes during his career and was making his first start for his new owners in 1940 LLC of Lake Worth, Fla.