It might have been Hawthorne’s closing weekend filled with Illinois stakes but it was Indiana connections that earned a lot of wins on the three-night weekend. Driver Kyle Wilfong collected five wins on the closing night card Sunday, Sept. 20 and nine over the three-day closing weekend. One of his biggest wins on the final night was in the evening’s Fillies and Mares Open Pace with 2018 Indiana Sires Stakes winner It’s Time for Fun. 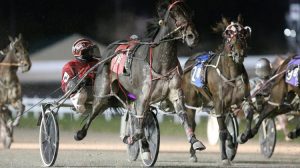 It’s Time for Fun, shown winning the Indiana Sires Stakes Championship in 2018 with Kyle Wilfong driving, was a winner in the Fillies and Mares Open Pace at Hawthorne during their closing night. Photo by Dean Gillette

Starting from post four in the 10-horse lineup, It’s Time for Fun slid over to the rail in third as Tempus Seelster and Travis Seekman reached the front after the quarter in :28.0 and led the way through middle fractions of :56.2 and 1:24.4. In the stretch, Wilfong moved the five-year-old daughter of Skydancer Hanover to the outside and rallied home for the win in 1:51.3, a final panel in :26.1. Tempus Seelster finished second over Velocity McSweets and Kyle Husted for third.

Wilfong also connected with another winner for his dad on the evening as Muscular Babe trotted home a winner in the $10,500 Open Trot. Muscular Babe sat in the two hole behind Classic Venture and Robert Smolin, getting out and getting to the wire on time in 1:56.4, just a neck over Classic Venture. Silverhill Volo and James Lackey finished third.

Other Indiana winners on the closing night card at Hawthorne were Farmers Only, driven by Kyle Wilfong and trained by Adrian Adam in 1:54.2. The Always a Virgin four-year-old is owned by Adam.

Premier Desirey was a winner on the night in 1:53.3 for driver Brandon Bates and trainer Harold Herrera. The three-year-old daughter by Real Desire is owned by Herrera.

Dirtylittlelies and Casey Leonard also earned a win for the Indiana sired group in 1:54.3. The two-year-old daughter of Rockin Image, trained by Kevin Miller and owned by Miller and Bert Hochsprung, now has two wins this season with her latest win her career best time.

Another Rockin Image son was in the winner’s circle for trainer Alex Adam as Rock Jagger picked up a win in 1:57.1. The three-year-old was driven to victory by Todd Warren.

Brandon Bates scored his second winner of the night behind Eternal Bliss for trainer Mark P’Pool. The three-year-old daughter of Riggins was a winner in 1:55.3 for owners Chestnut Acres, Tracee Hathaway and Kathy Millman.

The final Indiana winner on the night was Sweetshadyshark and Wilfong, who crossed the wire in a dead heat with Spee Dee Shark in 1:54.0. Sweetshadyshark is trained by Ronnie Roberts and paid $15.40 for the dead heat win. Brian Wulf, J. Fraher and Randy Alderks own the seven-year-old daughter of Shadyshark Hanover, who was bred by Wilbur Eash.