Four qualifying races and a pair of two-year-old matinee races were held Saturday, April 11 featuring several Indiana horses at Gil Crest Training Center in Bell, Fla. James and Verlin Yoder plus Jay Cross all had several involved in the races with an Indiana sired filly winning the first race. 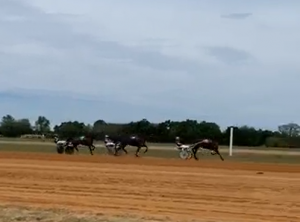 Townline Jated and Kenneth Shields lead the way in the; first qualifier of the day at Gil Crest Training Center. Photo by Cheyenne Yoder

Princess Sharktank, trained and driven by James Yoder, started from post three in the three-horse lineup. Townline Jated and Kenneth Shields cut early fractions of :30, 1:01.4, and 1:30.3 before Princess Sharktank moved out and took over on the top. The Tellitlikeitis sophomore filly paced home in :27.4 for the win by one-half length over Townline Jated, who is trained by Jay Cross. Leaderofthedance and trainer-driver Jim Mulinex finished third. The time of the mile was 1:59.0.

Princess Sharktank was making her first start of 2020. Last year at two, she was a winner in one race in a time of 1:55.0 at Harrah’s Hoosier Park.

Explosive Swan made her return in the fourth race. Driven by Shields, the three-year-old daughter of Swan for All sat behind Verlin Yoder and Olympic Glory, a sophomore daughter of Chapter Seven, in the mile timed in 2:01.0. Olympic Glory was a three-length winner over Explosive Swan, who had only two starts last year at two.

Other winners on the day were Gold Star Major, a five-year-old son of Mysticism owned by Cheyenne Yoder in 1:56.4 and Sound Track, trained, driven and owned by Verlin Yoder, who won her race in 1:57.0. Ideal Jesse, a six-year-old son of Jailhouse Jesse with a mark of 1:54.0 trained by James Yoder, finished second to Sound Track and trotted his mile in 1:57.4 with Shields at the controls.