Southern training centers in Florida and Georgia are ramping up their qualifiers, and many Indiana sired horses are included in the sessions. Saddle Up, owned by Jeff Fought and trained by Shane Bowermaster, won his qualifier in impressive fashion Thursday, March 25 at Spring Garden Ranch as the 2021 racing season in Indiana draws closer. 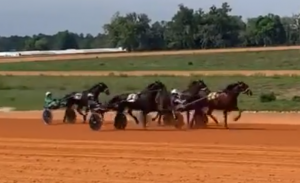 Saddle Up and Frank Affrunti move ahead in qualifying action at Spring Garden Ranch Thursday, March 25.

A sophomore son of JK Endofanera, Saddle Up was one of three horses from the Bowermaster Stable in the race. Whiskey Wizzard, a son of Tellitlikeitis, moved to the lead early with Tyler Rush driving, posting a first fraction of :29.0. Saddle Up and Frank Affrunti sat right at their back before moving out at the three-quarter mile marker in 1:29.3. From there, Saddle Up was full of pace, striding home in :26.0 for the win by a neck over Tomas and Artie Dick. Whiskey Wizzard finished third. The time of the mile was 1:55.3.

Unraced at two, Saddle Up was making his 2021 debut in the qualifier, which earned him a new career time. He is a home bred from Fought’s farm, Cornerstone Stock Farm of Shipshewana, Ind. The gelding is a half brother to Rock It Out, who took a mark of 1:51.4 last season under the direction of Donna Holt.

Fought also owns Whiskey Wizzard, who won two of four starts last year as a two-year-old. His quickest time was 1:52.2 at Harrah’s Hoosier Park. He is co-owned by Brian Carsey and Casey Myers.

Qualifying sessions have also started at Hawkinsville, Ga. and Sunshine Meadows in Florida and will soon begin at other Florida training centers such as Gil Crest Training Center, where several Indiana stables are training this winter, including Verlin and James Yoder, Bill Beachy, and Jay Cross.