Jim and Brenda Valiante, managers of the Hawkinsville Training Center, recently released the list of stables currently prepping their horses for the upcoming 2020 racing season. On the list are several Indiana sired horses that will be heading north in the next few months. 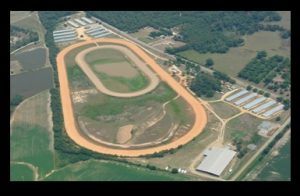 A look at Hawkinsville’s red clay mile track and facility in Georgia that is the home of several Indiana operations each winter. Photo by The City of Hawkinsville-Pulaski County

Included on the list are horses from Indiana-based Majestic Star Stable and the Dan Shetler Stable. Majestic Star Stable has 10 two-year-olds on their roster, including six Indiana sired trotters. Three freshmen are by multiple-titled Indiana Trotting Stallion of the Year Swan for All. Explosive Mission, Her Majesty’s Swan and Merciful Swan are in training for Jeff Edwards and his assistant Tom Grinstead. They also have a freshman gelding by Class Included, first crop sire in Indiana, named Jackrabbit Sam as well as two Jailhouse Jesse geldings Sir Jesse and WW Locked in Jail.

Majestic Star also has six three-year-olds in their shedrow, including 2019 Indiana Two-Year-Old Pacing Filly of the Year Priceless. She is joined by a pair of Mr. Cantab fillies Laney and Pretzel Party as well as an Encore Encore filly My Kind of Naughty, who is out of the great trotting filly Msnaughtybutnice.

The Dan Shetler Stable is also packed full of Indiana hopefuls, including 10 two-year-olds, including eight Indiana sired freshman. Dan Shetler, Kristin Shetler and Tom McClain are overseeing the conditioning of four Guccio freshman Allie, Rocky Road Reba, Sonoko and Style and Speed. They also have three Class including two fillies Dignafied and Innocent and an unnamed trotting colt. The final Indiana sired two-year-old is an unnamed colt by Tellitlikeitis out of Shetler’s great pacing mare Tressa. Shetler Stable also has 14 three-year-olds in training as well as eight older horses.