Two Indiana sired horses could not be separated at the wire during a special Valentine’s Day card at Miami Valley Raceway Monday, Feb. 14. Farmers Only and Quick and Shady crossed the wire in a dead heat in 1:55.0. 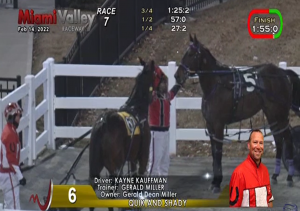 Farmers Only and Quik and Shady (left) are held by Gerald Miller after their dead heat in conditioned claiming action Monday, Feb. 14.

Farmers Only, driven by Dan Noble, was the favorite of the field and started from post five. To his outside was Quik and Shady and Kayne Kauffman, who were second favorite on the board. Reigning Bills and Chris Page left the gate with authority and secured the top spot early on through fractions of :27.2, :57.0, and 1:25.2. Around the final turn, the field began to bunch up and spread six across the track with Farmers Only and Quik and Shady wide into the stretch.

Reigning Bills held on gamely for most of the stretch drive but in the end, Farmers Only and Quik and Shady had the most momentum, scoring the win. Abacus and Sam Widger also closed late to finish third.