Fiftydallarbill, Schnitzledosomethin and Carol’s Z Tam all qualified for the finals in their respective divisions during elimination night for the 35th edition of the Breeders Crown at The Downs at Mohegan Sun Saturday, Oct. 20. Carol’s Z Tam, trained by Jamie Macomber, finished fourth in her division of the older pacing mares. Schnitzledosomethin won his division of the three-year-old pacing colts and geldings while Fiftydallarbill, trained by Bill Crone, finished second in his division to advance. 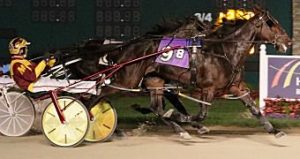 Carols Z Tam is shown winning earlier this season at Hoosier Park with Ricky Macomber Jr. in the bike. (Photo by Linscott Photography)

Driven by Brian Sears, Carol’s Z Tam was the first Indiana sired horse to step onto the track during the 14- race elimination night in the first division of the $25,000 Older Pacing Mares. Carol’s Z Tam was able to secure a two-hole trip behind Call Me Queen Be, who scored a gate to wire win in 1:50.3 with driver Eric Carlson aboard. Carol’s Z Tam paced her mile in 1:51.3 with a final panel in :28.1 to finish fourth.

The second division of older pacing mares was won by Shartin N and Tim Tetrick in a time of 1:52.0.

The second of two divisions for the $25,000 three-year-old colt and gelding trotters saw the talented Six Pack and Ake Svanstedt go gate to wire in 1:53.3. Fiftydallarbill and Brett Miller sat in mid pack until the final turn when they began to advance, trotting home in :27.4 to move into second place, just three-quarters of a length behind Six Pack. The Swan For All colt trotted his mile in 1:53.4 over the sloppy track to advance to the final. 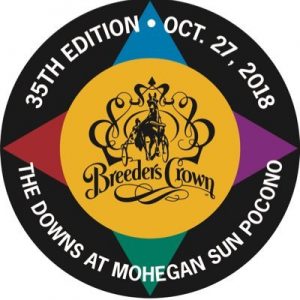 The 35th edition of the Breeders Crown will take place Saturday, Oct. 27 at The Downs at Mohegan Sun. Several Indiana horses will vie for the titles in the prestigious event.

The first division of the sophomore trotting colts and geldings was won by Tactical Landing and Sears, who earned their win in a time of 1:52.2.

Indiana sired Schnitzledosomethin and David Miller pulled in an upset in the final division of the three-year-old pacing colts and geldings, winning in a time of 1:51.1 to advance to next week’s final. It was only the third win of the season for the son of Fred and Ginger, who earned a career best time of 1:50.4 earlier this year at Hoosier Park.

Homicide Hunter, driven by Brian Sears, also advanced to the final in the Open Trot. Hannelore Hanover failed to qualify for the final.

On Friday evening, Indiana’s Verlin Yoder won his elimination of the two-year-old trotting fillies with Woodside Charm, who is now a perfect six for six in her career. The undefeated trotting filly by Chapter Seven stopped the timer in 1:53.0 and will be the overwhelming favorite for the final from post two in the $600,000 final set for Saturday, Oct. 27 at The Downs at Mohegan Sun Pocono.