The fields are set for the annual Hoosier Champions Night at Harrah’s Hoosier Park Friday, Oct 16. A total of 12 finals will be featured on the 15-race program to determine the champions from the two-year-old ranks to the older horses. 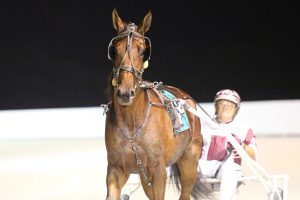 Breckenridge and Dan Shetler will be one of the favorites in the two-year-old trotting colt and gelding division of the Indiana Sires Stakes Super Final Friday, Oct. 16 at Harrah’s Hoosier Park. Photo by Dean Gillette

One of the hotly contested races on the night will be the two-year-old trotting colts and geldings as Breckenridge and Dan Shelter lead the way into the final with five wins in eight starts. The Class Included gelding has the most money of the field, just barely inching out Swingforthefences. The quickest freshman in the field is Brookview Bolt, who has a mark of 1:55.0. A case for any of these to take the final could be made, making it a great matchup in the fourth race of the night.

Breckenridge is trained by Dan Shetler and comes into the race on a four-race win streak, all wins in preliminary rounds of Indiana Sires Stakes action. He is owned by Shetler and Dojea Stables and was bred by Shetler and Sawgrass Farms. He has in excess of $105,000 in earnings this season with a mark of 1:55.2. Breckenridge starts from post two in the $270,000 final.

Swingforthefences hails from the Melanie Wrenn barn and has three wins this year in 10 starts. The Swan for All colt ventured from Indiana to tackle the Grand Circuit, finishing fourth in both the Bluegrass Stakes and the International Stallion Stakes at The Red Mile. He is back seeking to win the final from post three with Peter Wrenn at the controls.

Brookview Bolt will represent the Ron Burke Stable from post six with Sam Widger in the bike. With four wins in nine starts, the Swan for All gelding has only been back of third once in his career and comes into the final with a mark of 1:55.0. At $96,000 in earnings, Brookview Bolt is owned by Burke Racing, Knox Services, J & T Silva Purnel and Libby and Weaver Bruscemi. He was a winner two starts back in the Madison County at Harrah’s Hoosier Park.

First post for Hoosier Champions Night is 6:30 p.m. Purses for the evening exceed $2.4 million. Harrah’s Hoosier Park will complement the program with five $100 Megabets, $10,000 Guaranteed Hoosier High Five in Race 14, free live racing program available for download and winner’s circle giveaways. Many of the horses competing in the Indiana Sires Stakes finals are also eligible for the upcoming Breeders Crown events. Preliminary rounds for the Breeders Crown are set for Friday, Oct. 23 and Saturday, Oct. 24 with the Breeders Crown Championships set for Friday, Oct. 30 and Saturday, Oct. 31.