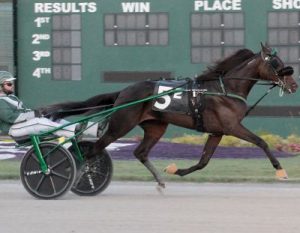 May Baby and James Yoder, who recently set a new track record at Harrah’s Hoosier Park, will step up to the Breeders Crown eliminations Friday, Oct. 18. Photo by Dean Gillette

May Baby, a two-year-old daughter of Guccio, has drawn post nine in the second of two eliminations for freshman trotting fillies. May Baby comes into her elimination with six wins in eight starts this season, taking her personal best record at Hoosier Park Oct. 1. She finished second in the Indiana Sires Stakes Super Final last week at Harrah’s Hoosier Park, trotting her mile in 1:57.2 over a sloppy track. May Baby is owned by Cheyenne Yoder and has earned in excess of $217,000. She was bred by Oakwood Farms of Montgomery, Ind. and was sold at the Hoosier Classic Yearling Sale for $8,500 last fall. May Baby is listed at odds of 10-1 in her elimination with the top five advancing to the final Friday, Oct. 25. Estimated post time for May Baby’s elimination is 8:30 p.m.

Priceless goes to post in the very next race, set for 8:50 p.m. The Rockin Image filly has been strong all season, winning six of her nine starts and taking her best mark of 1:51.1 in late September at Harrah’s Hoosier Park. With more than $328,000 in career earnings, she has proven to be a wise purchase by owners Kevin Miller and Bert Hochsprung of Illinois. She was purchased out of the Hoosier Classic Yearling Sale last fall for $30,000. Priceless comes into the race off a win in the $270,000 Indiana Sires Stakes Super Final last week. She starts from post five in the first of three eliminations with the top three from each division moving onto the final and the fourth highest earning finisher also advancing to make the 10-horse final. Priceless is selected as the second choice on the board at odds of 7-2.

Breeders Crown eliminations continue for three-year-olds and older horses on Sat. Oct. 19 featuring two Indiana sired older mares in the first of two eliminations listed as the sixth race. Custom Cantab has drawn post three at odds of 4-1 with David Miller in the bike while Hannelore Hanover starts from post six with Yannick Gingras at the controls at odds of 5-1. Estimated post time is 8:50 p.m.

In addition to Indiana sired representatives in the Breeders Crown, trainer Jeff Cullipher will also start one in the prestigious series. Grimmie Hanover will vie for a spot in the final from the first of two eliminations for three-year-old trotting fillies. The Cantab Hall filly has seven wins in 17 starts this year with more than $155,000 on her card. Owned by Pollack Racing and Cullipher, Grimmie Hanover’s best time of 1:54.3 at Harrah’s Hoosier Park in July. She starts from post five at odds of 12-1 with Corey Callahan driving. Estimated post time for the race is 7:30 p.m.