The Indiana Standardbred family came together Saturday, Jan. 25 for the annual banquet to celebrate the successes of the state for 2019. “A Night of Champions” drew a full crowd at the Indiana Roof Ballroom as the top performers of 2019 were honored. 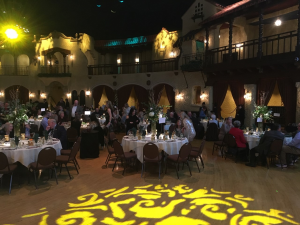 A packed house was on hand to celebrate the champions of 2019 during the annual Indiana Standardbred banquet in downtown Indianapolis. Photo by Tammy Knox

The evening, hosted by emcee Kevin Mack, began with dinner followed by the awards ceremony. Included on the night were awards to the top performers in the Indiana Sires Stakes, Indiana Sired Fair Circuit (ISFC), Elite Series and top driver and trainer from both the pari-mutuel and fair circuit.

The ISA Youth of the Year award was presented to Vanessa Miller and Matt Graber. Also, ISA Scholarship Award winners were recognized during the event.

Top breeders of the year included Larry Miller Jr. (Small Breeder) and Victory Hill Farm (Large Breeder) while the top pacing stallion was Rockin Image and the top trotting stud was Swan for All.

The evening was capped off with drawings for 48 door prizes.

A full list of winners will be provided in the March issue of the Indiana Standardbred Magazine, which will arrive in homes the first week of March.