Dan Graber of Shipshewana, Ind. was the subject of a feature Tuesday, April 23 from US Trotting Association media relations manager Ken Weingarter. Graber has hopes of taking his homebred three-year-old trotter, DG’s Caviar, all the way to the Hambletonian, and so far in 2019, he’s right on track. 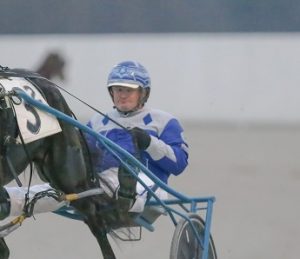 Andy Shetler will guide DG’s Caviar. So far, the duo has been perfect in 2019, including a win in their lone qualifier. (Photo by Dean Gillette)

DG’s Caviar is currently three for three in 2019 and will be featured in the $15,000 Cardinal final at Harrah’s Hoosier Park Wednesday. Andy Shetler drives the son of Prime Time Caviar, who is also a product of Graber’s farm. So far, he has earned in excess of $13,000 this season and his best time is 1:56.0.

DG’s Caviar is the last hope from that pedigree for Graber. His dam, 20-year-old Dazzling Kosmos, is now too old to carry a foal and his sire, Prime Time Caviar, passed away two years ago. Dazzling Kosmos has been a great brood mare for her connections. Every one of her seven foals have raced and won races. Her biggest winner thus far is Dazzling Valley, who earned nearly $60,000 and took a career best time of 1:57.3. So far, DG’s Caviar is the quickest of the group.

DG’s Caviar made breaks as a two-year-old and was turned out. Waiting a year seems to be the winning ticket for Graber, who has also staked the colt to the Old Oaken Bucket during Little Brown Jug Week. He’s also paid into the rich Indiana Sires Stakes.

“Hopefully he can get to the Hambletonian, but he’s going to have to prove himself before that happens,” said Graber in Weingarter’s press release. “Naturally I’d like to keep on winning. That’s what everybody wants, right? I hope he keeps right on going.”