Incredible Shark, the former Indiana Sires Stakes champion, added another win to his credentials Saturday, Jan. 30 with a win in conditioned pace action at The Meadowlands. The seven-year-old son of Shadyshark Hanover scored the victory in 1:52.2. 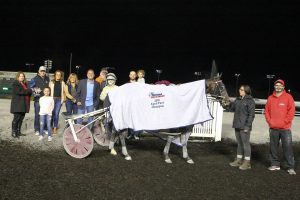 Starting from post eight, driver Andrew McCarthy had a game plan to take Incredible Shark to the lead from the start and was parked to the outside at the quarter in :27.3. He cleared Sports Column and Mark MacDonald before that pair retook the top spot by the half in :56.1. Into the turn, Incredible Shark stayed right on Sports Column’s back, ready to kick it up a notch in the stretch.

Once the stretch arrived, Incredible Shark was out and rolling, taking over the lead. He was able to sustain his advantage at the finish line by one and three-quarter lengths for the win, a final panel in :27.3. Sports Column finished second over Fox Valley Nemitz and Joe Bongiorno for third.

Trained by Jeff Cullipher, Incredible Shark paid $6.20 for the win. He was bred by Hoosier Standardbred Farm and Fair Meadow Farm and has been with owners Pollack Racing LLC and Cullipher since January of 2019. It was his first win of 2021 in four starts. The gelding now has 22 career wins in 141 starts and in excess of $415,000. His best time of 1:49.3 was taken as a five-year-old at The Meadowlands.