Incredible Shark, former Indiana Sires Stakes Super Champion, added another win to his credentials Sunday, May 9 at Harrah’s Philadelphia. Trained by Jeff Cullipher, he was a winner in a higher conditioned pace with a purse of $11.200. 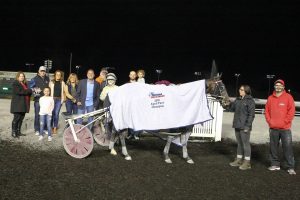 Incredible Shark, shown winning an Indiana Sires Stakes Super Final in 2019 with his connections, won his third race of 2021 at Harrah’s Philadelphia Sunday, May 9. Photo by Dean Gillette

Starting from post one, Incredible Shark was a factor from the start, grabbing the two-hole right behind Yankee Osborne and Todd McCarthy for driver Tim Tetrick as fractions of :26.3 and :55.0 were established. The seven-year-old Shadyshark Hanover gelding was shuffled to third as the outside lane of traffic formed and he looked as if he might not find the racing room he needed in the final quarter.

However, Incredible Shark did find that path and surged forward, getting the win by a head in a time of 1:51.0 for the win. Decision Day and Corey Callahan finished second followed by Dina Bolt N and David Miller for third.

As the favorite of the field, Incredible Shark paid $4.20 for the win.  He is owned by Pollack Racing LLC and Jeff Cullipher and was bred by Hoosier Standardbred Farm and Fair Meadow Farm. It was the third win of the season for Incredible Shark, who has 24 career wins in 152 career starts. With more than $439,000 in earnings, the veteran racehorse’s quickest time remains at 1:49.3 taken as a five-year-old at The Meadowlands.

Earlier in the card, another Indiana sired racehorse made it to Harrah’s Philly’s winner’s circle. Skyway Billy, driven by Dexter Dunn, was a winner in 1:54.0 in claiming action. The nine-year-old gelding by Dontgetinmyway scored the victory as a longshot, paying $12.40 for the win. Daniel Cuticchia is the owner and Raymond Burt is the trainer. Skyway Billy was bred by Vernon Slabach and was a $1,500 yearling purchase. He was one of only 15 foals sold at auction that year. He now has 30 wins in 241 starts with more than $186,000 in earnings, showing the true racehorse he’s been over the past eight seasons. His career best was taken as a seven-year-old in 1:51.3 at The Meadowlands.