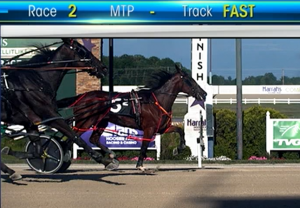 Imaroknbugatti and Trace Tetrick fend off a late challenge from Major Attribute and Michael Oosting at the wire for the win in the Sweet Lou Series first round.

In the stretch, Imarealrokbugatti was left first over and had the most momentum. He was ready to hit another gear. The Rockin Image gelding paced home in :27.4 for the win in 1:51.2. Major Attribute and Michael Oosting closed in late with a big move on the outside to finish a half-length back in second over Gazing Star for third.

Imarealroknbugatti paid $10.80 for the win. The four-year-old is owned and trained by Perry Smith, who also bred the Indiana horse. It was the first round of the Sweet Lou Series, and he now has six wins this year. His career mark was taken this spring at Harrah’s Hoosier Park in 1:51.1 and he now has 11 career wins for Smith, who also raced his mother Im the Real Lady.

The Real Desire mare raced as a two-year-old and finished second in the Indiana Sires Stakes Final and did not race as a three-year-old. Imarealroknbugatti is her second foal and is a 100 percent producer. Her most successful foal is Ima Real Ladys Man, who has a mark of 1:49.2 and earnings of more than $330,000. She has a two-year-old this season named Ima Real Bombshell and a yearling full sister to Imarealroknbugatti named Imarealrockinrebel. The mare had a foal this spring, a colt by JK Endofanera that is not named yet.

The other division of the Sweet Lou was won by A Bettors Risk and John DeLong, paying $13.00 to win. A Bettors Risk earned his third win of 2022 for trainer Payton Ode and owner Rick Howles. The nine-year-old gelding by Bettor’s Delight started his career in Canada before transitioning over to the United States as a five-year-old. His career mark of 1:48.3 was taken at Harrah’s Hoosier Park in 2018 and overall, he has 30 career wins and more than $360,000 in career earnings. The war horse has not missed a year of racing and has at least one win per year with the exception of his two-year-old season when he only had six starts.

ER Sam, driven by Bradley Ferguson, finished second over Truffle Dog and Sam Widger for third in the race won by A Bettors Risk.