While racing took a break in the state of Indiana Sunday, June 26, one Indiana sired horse was winning at Bangor Raceway in Bangor Maine. Imageofarocker and Walter Case Jr. led gate to wire for the win in 1:57.2 in the conditioned $4,500 pace. 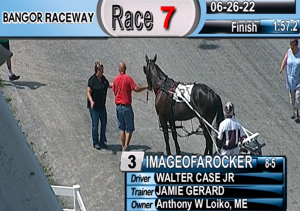 Imageofarocker wasted no time getting to the lead, passing by the quarter in :28.2 and half in :59.0 before seeing company on the outside. Casimir Overdrive joined him on the lead heading to the three-quarter pole on the half-mile oval and tried hard to get by him, but Imageofarocker was too strong, pacing home in :28.4 to win by one and one-quarter lengths. Casimir Overdrive was second just a half-length head of Rose Run Slider and Shawn Thayer.

Imageofarocker paid $5.20 as the favorite. The seven-year-old son of Rockin Image is owned by Anthony Loiko and trained by Jamie Gerard. Maumee River Stables of Indiana bred the gelding, who picked up his second win of the year. Overall, he has 11 wins with his career best time taken as a three-year-old at Harrah’s Hoosier Park for trainer Ernie Gaskin.

Imageofarocker is well traveled. After leaving Indiana in 2018 near the end of his three-year-old season, he won race at Monticello, the Meadowlands, Plainridge and now Bangor. He has 151 starts and more than $142,000 in earnings. He is the first foal from the Real Artist mare Timeless Artist, who had a mark of 1:52.1 and made over a quarter million during her racing career. In addition to Imageofarocker, she has produced the mare Timeless Virgin, by Always a Virgin, who has a mark of 1:52.0 and is still racing. She also has a two-year-old this year named Timeless Withyou, a filly by Luck Be Withyou.