Ima Diamond Babe, driven by Tony Hall, scored a win in the $19,800 featured conditioned trot Tuesday, Dec. 21 at Hollywood Gaming Dayton. Her biggest competition in the race was her stablemate, May Baby, who was driven by trainer James Yoder. 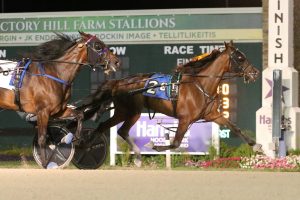 In the stretch, Ima Diamond Babe found another gear and trotted gamely to the wire in :28.4 to earn the win in 1:56.2. Kikimora and Trevor Smith followed cover to finish second over May Baby who held her ground for third.

Ima Diamond Babe was a bit of a surprise to bettors, paying $14.40 for the win. The three-year-old Guccio filly is owned by Cheyenne Yoder. She was bred by Merle Yoder.

It was the fifth win of the year for Ima Diamond Babe, who took a new career best mark of 1:55.0 earlier this year at Harrah’s Hoosier Park for the Yoder Stable. Her win at Dayton pushed her over the $100,000 mark for the year and more than $216,000 lifetime.

Cheyenne and James Yoder are known for their work with trotters. Ima Diamond Babe is their latest standout. She was purchased by them at the Hoosier Classic Yearling Sale under the name Topville Imogene for $27,000. She was part of the last full crop of Guccio foals before he was sold into the driving horse industry. Although he still has a few foals registered and racing at two, he is mainly used for driving horse breeding now. Ima Diamond Babe was the fourth highest priced yearling that year.

Overall, Guccio has sired many speedy trotters. Yoders have the richest in May Baby. James’ father, Verlin, has the quickest with Katkin American earning a mark of 1:51.2 as a five-year-old. Ima Diamond Babe is now ranked fifth on the list of leading Guccio foals by earnings. Northern Skyway joins May Baby and Katkin American as Guccio products with earnings over the $300,000 mark.