The connections of I’m the Candyman had a lot to celebrate on Cinco de Mayo. Driven by Ricky Macomber Jr., I’m the Candyman scored an impressive win Thursday, May 5 at Harrah’s Hoosier Park. 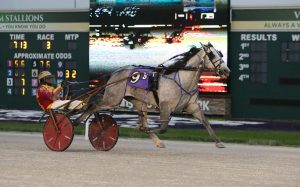 I’m the Candyman is following in his mom’s footsteps, scoring a new lifetime mark Thurs. May 5 at Harrah’s Hoosier Park with Ricky Macomber Jr. in the bike. Photo by Dean Gillette

Starting from post eight, I’m the Candyman floated over to the inside near the back of the pack as Milford Shmilford and LeWayne Miller pursued the top spot, taking it away from Crystal Beach and Atlee Bender at the quarter in :26.3. From there, I’m the Candyman began to move on the outside and ended up first over at the half in :55.2 and three-quarters in 1:25.2. In the stretch, I’m the Candyman took over and sped home in :27.4 for the win. The grey gelding was a winner by two and one-quarter lengths in 1:54.0 over Cyrstal Beach. Ayy Trevor and James Yoder closed gamely to finish third.

I’s the Candyman was a big upset winner, paying $85.00 to win. The gelding is owned by Lesbia Perezdeluna of Indianapolis, who just acquired the JK Endofanera son. Emeral Highlands Farm of Mt. Vernon, Ohio bred the flashy gelding, who now has two wins in 2022. Vern Fisher trains him and the mile was a new lifetime mark.

I’m the Candyman has the pedigree to be a good racehorse. He is the second foal of the standout Indiana sired mare Candy’s a Virgin, a state champion who earned more than $333,000 during her career and took a mark of 1:51.0. Out of two foals of racing age, she has also produced Candy on the Beach, a filly with a mark of 1:51.0 and nearly $100,000 in earnings. The family also has a two-year-old son of Fear the Dragon named Dragon Candy and a yearling filly by the same sire named Fear My Candy.

In the very next race, another JK Endofanera filly was a big winner. Ivanna Gomore and John DeLong also upset their field with a closing win in 1:55.3. The sophomore filly paid $24.20 to win. She was a half-length winner over Way Too Sweet and Michael Oosting and Filthy McNasty, driven by Jared Finn.

Ivanna Gomore is owned by Tom Luther and trained by Jennifer Redmond. David Yoder bred the filly, who earned her first win of 2022 in her second start. The mile was also a new lifetime best.