The Indiana Horse Racing Commission held their December meeting Thursday, Dec. 1 at Harrah’s Hoosier Park. With a lot of items on the agenda, the meeting took more than four hours to get everything covered on the agenda, including the approval of racing dates for 2023. Commissioners Gus Levengood and Chairman Philip Borst were in attendance with Commissioners Bill McCarty and Bill Estes joining via phone. 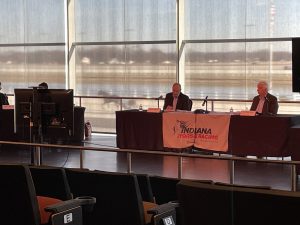 Harrah’s Hoosier Park will once again host a 160-day racing season that will mirror the 2022 schedule. Racing resumes Friday, March 24 and will conclude Saturday, Dec. 9, 2023. Post time will remain at 6:15PM with post times on Triple Crown events set for 7:20 p.m. Also, the track noted they will need to adjust post times occasionally to accommodate special events. Rick Moore, Vice President and General Manager, made the presentation to the Commission on behalf of Harrah’s Hoosier Park.

“We have successfully executed our 2022 plan, and we are ending the meet six percent ahead of last year,” said Moore. “Through November, we have had $113.5 million in handle and an average of 8.34 starters. The NYRA contract that we had this year was new and turned out to be a good move. We are getting our signal into many more places this year including Australia. We are only one of five tracks getting our signal into them right now.”

Moore noted with the third Breeders Crown set to return next fall, the stakes schedule will reach $12 million in 2023. The announcement was just made that two freshman trotting stakes released by The Meadowlands will be held in Indiana next year, the Jim Doherty and the Peter Haughton Memorials.

Moore also noted some of the capital expenditures to be completed next year include full LED lighting to all track poles on the track, some additional cameras in the barn area, radiant heating in the paddock and backside audio system upgrades, to name a few. New track equipment will also be added to the fleet in 2023.

In addition to the track dates, each of the horsemen’s organizations made presentations on their achievements and movement in 2022, including the Indiana Standardbred Association (ISA). Tony Renz, executive director for ISA, made the presentation. Also in attendance was Joe Putnam, President, Ernie Gaskin, director, and Roger Young, attorney for ISA. Renz noted the ISA has just under 1,000 members with many perks available to them, including dental and optical insurance as well as race bike insurance. The ISA also provides up to $3,000 in emergency funds to members, allotted on a case by case basis. The organization also has college assistance, a health clinic located at Hoosier Park, and several outings throughout the year including the upcoming Bowling Event set for this Sunday at Championship Lanes in Anderson, Ind.

Renz also noted the fairs received $24,000 total in grants for racing in 2022. Renz talked about some of the highlighted events ISA partnered with Hoosier Park on during the meet and noted, “Getting guests coming back to the track after the pandemic is one of the most important things for us to do.”

Another topic of interest to all horsemen’s groups is the potential introduction of I-Gaming into the legislative session, which begins Monday, Jan. 9. Renz added, “If I-Gaming is going to be a topic, we have to be at the table.”

Renz concluded by mentioning the new Economic Impact study that was recently prepared by Purdue University. Numbers are strong over the last study and he noted those results will be available soon.

In Hoosier Park’s presentation, Jacob Rheinheimer touched on race marketing for the season and noted the focus was on on-track customers, on-track VIPs and online customers. He also noted the track offers one free contest each racing day and due to some injuries that sidelined the horse for First Turn Stable, the fractional ownership program will expand to include two horses in 2023 and those horses are currently preparing for a return to the races and should be ready to go when racing resumes in March.

Jessica Barnes of the Indiana Breed Development gave an update. She explained the county fair circuit will make a stop at Harrah’s Hoosier Park in 2023.

“This will give these horses the opportunity to see how they fare here over a bigger track,” said Barnes. “It will help with the entry box in the light area of entries in June and should be beneficial to everyone.”

All proposals were unanimously approved by the IHRC. Chairman Borst noted, “The things you all are doing on and off the track is amazing. Indiana has a lot to be proud of.”