First there was Hannelore Hanover, who added 2017 Horse of the Year honors to her resume last year. Then, Fiftydallarbill added his name to the national scene as a 2017 Breeders Crown winner. Earlier this year, it was Swandre the Giant who was turning heads across North America. Now, Homicide Hunter turned in the fastest mile ever by a trotter of any age or sex when he stopped the timer in 1:48.4 at The Red Mile. The one common thread all of these superstars have is they were all sired in the great state of Indiana. 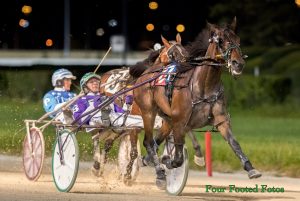 Swan Chase and Brandon Bates recently won the $25,000 Invitational Trot at Hawthorne against open company. The Swan for All gelding is closing in on a half million in earnings. (Photo by Four Footed Photos)

These four trotters have been the subject of recent national headlines, but there are many more from Indiana that are recording a great amount of success. Satin Dancer finished second on Hambletonian Day in the Vincennes Stakes this summer. Great Swan, a stablemate of Fiftydallarbill, is closing in on a half million dollars in earnings and recently won the $25,000 Invitational against open horses at Hawthorne. Rose Run Parker has competed and won against open company at various tracks and is nearing a half million dollars in earnings. And there are a plethora of youngsters making their mark this season in Indiana that look like they might step up to the next level. These names are just a few that stand out, but this list is only scratching the surface of talent from the Indiana trotting ranks.

Indiana has always had some standout trotters. It was only a few years ago that Natural Herbie went to The Meadowlands and won the Vincennes Stakes followed by a win in the $250,000 International Trot at Yonkers, giving the millionaire trotter status nationally. And, more than a decade ago, Sheezhomewardbound and ABC Mercedes were dominant in their classes in Indiana and ventured out of state occasionally to test the waters.

The trotting program has continued to grow and advance, giving Hoosier trotters a big stage to perform on and dream big outside the borders of Indiana.