One week from tonight, the 2021 Indiana Sires Stakes will come to a close with Hoosier Champions set for Friday, Oct. 15 at Harrah’s Hoosier Park. Finals for all divisions will take place to crown the 2021 champions of the year. The preliminary rounds wrapped up Friday, Oct. 8 featuring older trotters, and three-year-old pacing colts and geldings and fillies. One filly that will be favored to shine during Hoosier Champions is the standout sophomore Hot Mess Express. 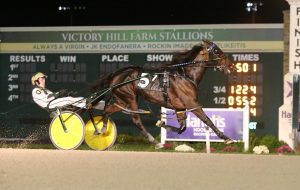 Owned by former NBA Player Sam Bowie, Hot Mess Express has been spectacular on the national scene in addition to the Indiana circuit. The Panther Hanover filly was a gate to wire winner for John DeLong in a time of 1:50.1 in the eighth and final preliminary round. She finished more than two lengths ahead of Skyway Brittney and Trace Tetrick in second. Somethingbeautiful and LeWayne Miller finished third.

Hot Mess Express is 10 for 12 in 2021. Her best record was taken at The Meadowlands in mid July in 1:48.3. Overall, she is 13 for 20 with four seconds, meaning she’s only finished worse than second three times in her career, which now has a bankroll of more than $450,000. Hot Mess Express is a perfect six for six in ISS action this year. Her biggest win was recorded in the Mistletoe Shalee in her record setting win at The Meadowlands.  Tony Alagna trains the filly.

In the other division of sophomore ISS filly action, Kobe’s Gigi was a winner for driver Matt Krueger. After grabbing the top after the first quarter in :26.0, the JK Endofanera filly held her ground on the lead all the way to the wire. Cruisin Pearl and Sam Widger guided the former Indiana Sired Fair Circuit filly up into second, missing the win by a neck. Pure Coton, also a contender on the ISFC earlier this year, finished third with John DeLong in the bike.

Kobe’s Gigi is trained by Missy Essig. She is owned by Leander Schwartz and Black and White Stable. Harvey Fry bred the filly.

The draw for Hoosier Champions is set for Tuesday, Oct. 12 at Harrah’s Hoosier Park.