After hitting the road for Grand Circuit action, Hot Mess Express returned to Indiana for the seventh round of Indiana Sires Stakes Saturday, Sept. 18. Guided by John DeLong, it was another win for the filly, who is now nine for 11 in 2021. 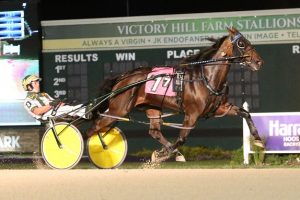 An outside post kept Hot Mess Express on the outside through the first turn before she reached the top spot after the quarter in :26.2. From there, she was able to slow the pace down to the half in :55.2 with Somethingbeautiful and LeWayne Miller sitting right on her back. There was no movement to the outside around the final turn and Hot Mess Express maintained her hold of the top spot all the way to the wire in 1:49.0, a final panel paced in :26.0. Somethingbeautiful finished one and three-quarter lengths back in second followed by Kobe’s Gigi and Matt Krueger for third. All three fillies paced under the 1:50 time barrier.

Hot Mess Express is trained by Tony Alagna for former NBA star Sam Bowie of Florida. Amy, Madeline and Ethan Giberson bred the Panther Hanover filly. After going undefeated this year, including a win in the $174,400 Mistletoe Shalee at The Meadowlands, Hot Mess Express traveled to Pocono Downs where she finished sixth in the $250,000 Lynch Memorial. From there, she traveled to Woodbine for the Fan Hanover, winning her elimination and finishing second in the $335,750 final. More than $428,000 of her $563.000 bankroll has been recorded this year.

In the other division of sophomore pacing fillies, Skyway Brittney was a winner for trainer Zach Miller. After getting way near the back of the pack for Trace Tetrick, Skyway Brittney was able to follow cover toward the front in the second half of the race, setting her up for a final quarter in the stretch in :26.4. She blazed down the track and secured the lead by two and one-half lengths in 1:51.3, a new lifetime mark. Shelly Rockwell and James Yoder finished second over Cruisin Pearl and Sam Widger for third.

A mild longshot, Skyway Brittney paid $16.20 for the win. The Rockin Image filly is owned by Zach and Dessa Miller and was bred by Lyle Slabach. She now has five wins in 17 starts this year and increased her career earnings to more than $133,000 for the Miller family.