Harness racing used to make an annual stop in Johnson County for the fair each year. In the 1920’s, the circuit moved up the road from Columbus to Franklin and then over to Shelbyville to form a circuit for Standardbred owners, trainers and drivers. Although racing is no longer held at the Johnson County Fairgrounds, horses are still very prevalent in the county and numerous shows are held in conjunction with the fairgrounds each year. 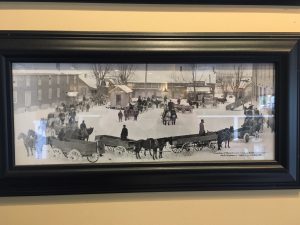 This photo, provided by the Johnson County Historical Society, is one of many hanging in the McAllister’s Deli in northern Johnson County. The photo depicts the importance of horses in the area a century ago.

Along with racing, the fair also had other displays that brought in crowds. According to the Johnson County Public Library, very few stands or midway rides were provided, but numerous displays for farm implements and hot air balloon display in which its owner, Luther Dennis, would ascend upwards before letting go and parachuting to the ground. The fair also included a carnival tent in which a local wrestler and boxer would engage in a bout each year.

In 2016, the Hoosier Horse Park in southern Johnson County entertained the idea of adding a half-mile racetrack to its facility to host county fair racing in the summers and join the Indiana circuit, but the plan never moved forward and is currently at a standstill.

Numerous photos can be found all around Johnson County showcasing the horses of the area as well as the history of how important horses were to the community. Several old photos are currently displayed in the McAllisters in northern Johnson County depicting life surrounding horses a century ago. The Johnson County Historical Society provided the photos that currently hang in McAllisters.