Horsepower: Indiana’s Equine Industry will premier tonight (Monday, Dec. 2, 2019) on WTIU, the public television station based in Bloomington, Ind. It will also be available on Facebook Live. 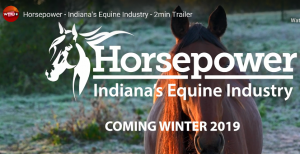 Horsepower: Indiana’s Equine Industry will premier at 8PM Dec. 2 on WTIU, the public television station out of Bloomington, Ind. Standardbred racing is a feature in the two-hour-documentary.

The documentary explores all types of performance horses in the state of Indiana including Standardbreds. Dan Patch and Single G will be featured along with footage and interviews from Harrahs Hoosier Park and industry participants. The documentary will be shown from 8 until 9:30 p.m.

The documentary will also feature economic factors of the equine industry on the state of Indiana. Both Purdue University and St. Mary of the Woods education programs geared toward equine employment opportunities will also be featured.

Horsepower: Indiana’s Equine Industry will also air on WTIU Thursday, Dec. 5 from 9:30 – 11p.m. Other Indiana public television stations are also expected to pick up the documentary and air it on their channels in December.