After more than a decade, the Hoosier Cup is back at Harrah’s Hoosier Park. The race takes on a slightly different format, now reserved for three-year-old colt and gelding pacers that are Indiana Sired. Three eliminations going for $15,000 were held on the Sunday card with Rockin on Venus scoring the quickest of the three. 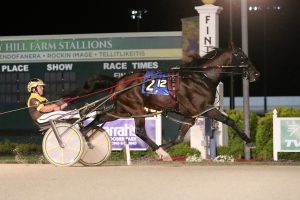 The big strided Rockin on Venus was the quickest winner in the three Hoosier Cup eliminations Sunday, June 27. Michael Oosting drove the sophomore to victory. Photo by Dean Gillette

Rockin on Venus and Michael Oosting used their inside post to their advantage at the start, getting the garden spot seat behind first leader Saddle Up and John Delong through the first fraction of :26.1. From there, Rockin on Venus moved to the lead to set the remaining fractions of :54.0 and 1:23.0.

In the stretch, Rockin on Venus began to pull away from the field, pacing home in :26.3 for the two and one-quarter length win in 1:49.3. JK’s Champ and Sam Widger endured a first over trip for second followed by Saddle Up, who maintained ground along the inside for third.

Rockin on Venus is owned and bred by Emerald Highlands Farm. Kelly O’Donnell trains the sophomore son of Rockin Image, who was the favorite of the field. The win was the fourth of the year for Rockin on Venus, who also established a new career best time in the mile. After going winless in two starts at two, Rockin on Venus has caught fire this season and now has in excess of $47,000 in career earnings.

Virgo was also a winner in Hoosier Cup elimination action. Driven by Trace Tetrick, the Always a Virgin gelding got away in mid pack and followed along as the lead exchanged hands through fractions of :27.3 and :56.1. By the three-quarter pole, Virgo had secured the top spot and hit another gear, pacing home in :26.1 for the win in 1:50.0. Rockinsomewhere and Michael Oosting finished four lengths back in second followed by Whiskey Wizzard and Brandon Bates for third.

Virgo is trained by Dylan Davis for owners Howard Taylor and Jeffrey Billings and also owns part of the sophomore pacer. Dustin Miller bred Virgo, who earned his first win in three starts for 2021 in the elimination. He also established a new career best time. Virgo now has in excess of $143,000 in career earnings.

The third elimination winner was Joelsyy Hanover and Trace Tetrick. Trained by Melanie Wrenn, the JK Endofanera gelding followed along as Goldie’s Legacy and Sam Widger set the early fractions of :26.2 and :55.4. From there Joelsyy Hanover was out and moving and was ready to take over at the three-quarters in 1:24.4. In the stretch, a battle ensued as This Kit Rocks and Joey Putnam kicked in for the final race to the wire. In the end Joelsyy Hanover got the edge by a head over This Kit Rocks for the win in 1:51.3. My Wish Came True, another son of JK Endofanera driven by Michael Oosting, finished third.

Joelsyy Hanover was a surprise to bettors, paying $21.00 for the win.  The Hanover Shoe Farms product is owned by Ellie Bale and John Pentland of Ontario. It was a new career best time for the gelding, who only started once at two. He now has two wins in six starts for 2021.