The state’s top Standardbreds were in action for the annual Hoosier Champions Night featuring 12 finals for Indiana Sires Stakes action. Several favorites were defeated but the impressive part of the evening was several of the winners are also nominated to the upcoming Breeders Crown at Harrah’s Hoosier Park, creating an exciting scenario for the upcoming event. 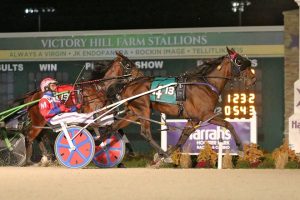 One surprise on the evening was a win by JK Going West, driven and trained by LeWayne Miller. The two-year-old pacing colt by JK Endofanera, had the extreme outside post nine and had to rally hard to challenge early, pushed three-wide at the quarter in :26.4 and also experiencing some interference from a breaking horse. He eventually settled in mid-pack along the inside.

Once the field was settled, it was What’s Your Beef and Trace Tetrick who were leading the way down the backstretch. Skyway Victor and Sam Widger tracked the progress of the leader from the two-hole with Betterrock and Andy Miller also saving ground early.

Virgo and Tim Tetrick were flushed out to challenge first over in the final turn as What’s Your Beef kept up the tempo through the three-quarters in 1:24.0. In the stretch, it was anybody’s race to win. Miller found the clearance he needed with JK Going West, who sprinted home in :26.2 to earn the win in the $270,000 Indiana Sires Stakes Final for freshman pacing colts and geldings. What’s Your Beef finished a neck back in second followed by Virgo for third.

Beechy, who is a former Trottingbred trainer and driver from northern Indiana, teamed up with French to purchase JK Going West from the Michiana Classic Yearling Sale for $12,500. The gelding was one of 69 sold at public auction from the first crop of JK Endofanera.  Bred by Silver Linden Farms, JK Going West is peaking at the right time, winning the final preliminary leg of Indiana Sires Stakes action and then the super final to make it two in a row heading to the Breeders Crown. JK Going West now has three wins in 11 starts with five additional finishes in second place. The Super Final win boosted his career earnings to more than $200,000.

Another big winner on the night was Bridge to Success in the two-year-old trotting colt and gelding Super Final, also going for a purse of $270,000. The freshman trotter, under the guidance of driver John DeLong, was out and moving early at the start, parked to the outside in mid-pack as Brookview Bolt and Sam Widger crossed over to the lead after the quarter in :28.1. Brookview Bolt led the way for the remainder of the mile as Bridge to Success began to advance around the final turn. In the stretch, the Jailhouse Jesse gelding kicked into gear, trotting home in :27.2 for the win by a neck over Brookview Bolt. Swingforthefences and Peter Wrenn rounded out the trifecta in the 1:54.4 mile.

Bridge to Success paid $9.80, $5.00, $4.00 across the board. He earned his second career win in his seventh start for trainer Roger Welch and owners William C. and William P. DeLong and Welch. He now has in excess of $160,000 in earnings and a new lifetime mark from the Super Final.

Bridge to Success has big horseshoes to fill in the Welch barn. He is a full brother to superstar trotter Bridge to Jesses, who finished second in the $70,000 Indiana Sires Stakes Final for older trotting horses and geldings. Bridge to Jesses is now less than $6,000 away from becoming the state’s newest millionaire. Now seven, the gelding has 45 career wins in 106 career starts with a personal best time of 1:51.1 taken last year at six. Both he and Bridge to Success are nominated to the Breeders Crown, which will offer preliminary rounds next Friday and Saturday at Harrah’s Hoosier Park to set up the finals Friday, Oct. 30 and Saturday, Oct. 31. Michael and Randy Wilt of Missouri bred the brothers, who have a yearling half-brother by What The Hill, a first crop sire selling this year in Ohio.

Earlier in the day, the Indiana Standardbred Association provided boxed lunches in the barn area for those participating in Hoosier Champions Night. The Indiana Standardbred Breed Development presented trophies and blankets to all winners as Peter Lurie of TVG and Gabe Prewitt of The Red Mile and Pompano Park hosted the festivities in the winner’s circle.