Harrah’s Hoosier Park held a special set of qualifiers Friday, June 26 for two-year-olds. A total of 10 races were held to showcase the next set of stars in the Hoosier State. 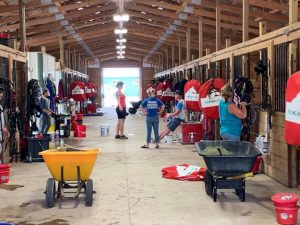 The quickest mile of the day was recorded by Somethingbeautiful, one of three Always a Virgin winners on the day. Hailing from the Dylan Davis barn, Somethingbeautiful sat in mid pack as Hoosier Shark and James Yoder set the tempo through fractions of :28.3, :58.1 and 1:27.4 before Somethingbeautiful and driver LeWayne Miller came up for the challenge.

Somethingbeautiful is owned by Howard Taylor, Edwin Gold and Abraham Basen. Aaron Stutzman is the breeder on the freshman filly who brought $30,000 at the Hoosier Classic Sale last fall.

Among the trotters, a new Indiana stallion had a nice showing from J-S Hopscotch from the Jack Myers barn. The Mr Web Page gelding followed Fox Valley Memo and Matt Krueger through the first quarter in :31.0 before moving around and taking control by the half in 1:02.2. Driver Alex Udell kept J-S Hopscotch focused on his job and began to pull away from the field in the stretch, trotting home in :28.1 for the win in 2:00.3. Fox Valley Memo finished second over Wild Jailhouse and Doug Rideout for third.

J-S Hopscotch was one of five foals by Mr Web Page that sold at public auction last year, selling under the name Hopscotch at the Michiana Yearling Sale. He brought $16,000 through the sales ring for breeder Ben Wittmer Jr.

Other trotting winners on the day included No Lingering (Waldorf Hall) in 2:00.2 driven by Ricky Macomber Jr., Sly Little Fox (Swan for All) in 2:01.2 for JD Finn, and Ima Diamond Babe (Guccio) driven by James Yoder in 2:01.0.