First crop sires in Indiana were well represented in the second day of action on the Indiana Sired Fair Circuit (ISFC) Thursday, June 2 at the Converse Fairgrounds. Helpisontheway had two winners on the day, one filly and one gelding named Help Dust as he begins his career as a sire. 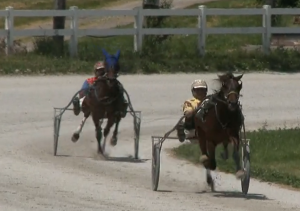 Five freshman colts and geldings approached the starting gate together for the final division of the ISFC. All had their ears up and checking out the surroundings of their first career start. Heading down the stretch the first time, one went off stride leaving four on the gate and Help Dust was ready to tackle his new job. The gelding, guided by trainer Doug Rideout, floated out and over to take on the top spot followed by Woodside Genius and Robert Taylor. The remainder of the field made breaks before the quarter in :35.4 giving the top two a large margin heading to the half in 1:09.4. At the three-quarters, Taylor moved Woodside Genius out to prepare for a challenge and the tempo picked up in 1:42.0 before Woodside Genius went off stride for a few strides in the turn, giving Help Dust the opportunity to prepare for the stretch.

In the stretch, Rideout tapped Help Dust and he responded. With his ears pinned, he was all business, trotting home in :30.1 for the win by four and three-quarter lengths in 2:12.1. Woodside Genius finished second over MJR Jessie’s Jet and Jordan Ross for third.

Help Dust is owned by Julie Rideout, Dr. Alan White and Dave Gamble. The gelding was bred by Pond-A-Acres and he is a half-brother to the quick freshman trotter from last year, Tug and Coop by Dover Dan. The family has a yearling sister named Dandelion’s Help, also by Helpisontheway, that will sell this fall.

Other two-year-old trotting colt and gelding winners included Reckless Reviver (Michael Detweiler, 2:14.4) a son of Swan in a Million; Mr Knowitall (2:09.0, Doug Rideout), a son of You Know You Do; and A Majorsmackin (2:13.0, Jordan Ross), a son of Major Athens.

The fastest freshman filly on the day was Tucky Girl, driven by Robert Taylor. The Pinetucky filly went gate to wire in her division, winning by one and one-quarter lengths in 2:09.0. She trotted home in :29.2 to fend off Unforgettable and Doug Rideout. Bet on Brenna and Jay Cross finished third.

Tucky Girl is owned by Rocking Meadows Stable and trained by Mervin Schmucker. She’s a homebred filly for her connections.

Other two-year-old filly trotter winners on the day were Youknowyoudid (2:12.1, Robert Taylor), a daughter of You Know You Do; Gigi Dream (2:11.2, Jordan Ross), a daughter of Helpisontheway; and Cash in the Bank (2:13.4, Doug Rideout), a daughter of Dover Dan.

Four divisions of three-year-old pacers were also held. The day saw the return of Luckychris to the ISFC. He was a winner in his division in 1:57.4, just a half length ahead of Vel Larry and Clay Craib. Townline Winner and Robert Taylor finished third.

Trained by Curtis Rice, Luckychris was driven to victory by Clifton Bell. The three-year-old colt is a son of Luck Be Withyou and is owned by D And R Racing Stable.

Videos of the entire program are available on the ISA Website’s homepage at www.indianaharness.com.