Horses from the Walter Haynes Jr. Stable were ready to go for the first round of qualifiers in 2021 at Harrah’s Hoosier Park Wednesday, March 10. The stable sent out three winners on the seven-race card as they prepare for opening night set for Friday, March 26. 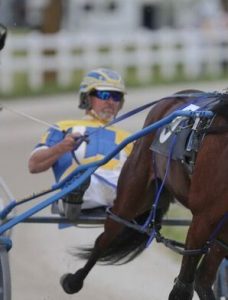 Trainer Walter Haynes Jr. had his stable ready for the first round of qualifiers March 10, winning three of the races on the card. Photo by Dean Gillette

Leading off the way to the winner’s circle for the Haynes trainees was Prince McCardle N. The eight-year-old son of McArdle sat patiently in the two-hole for driver Brandon Bates before moving out in the stretch and drawing away from the field by three and one-quarter lengths in a time of 1:56.2, the fastest mile of the day. Three Card and Joe Putnam finished second over Pine Knot Tuff and Randy Crisler finished third.

Prince McArdle N is owned by Debra Carsey, Sara Haynes and Maynard Miller. The New Zealand bred gelding arrived in the United States last season, earning a new career best time of 1:49.3. He won eight races in his native country before being imported to the United States, winning five races last year and bumping his career earnings to more than $61,000.

Haynes teamed up with driver Kyle Wilfong for his other two wins on the day. Wilfong moved around the final turn from mid pack with Roll with Time and paced home in :29.0 through a strong headwind for the 1:58.1 win. Roland Ontheriver and Joey Putnam finished second. All on Red and LeWayne Miller finished third.

A four-year-old son of Time to Roll, Roll With Time is owned by Jeff Fought Racing, Brian Carsey and Casey Myers. The Indiana sired product of Hickory Hollow Stables He took a new career best time of 1:50.4 last year at Harrah’s Hoosier Park and returns ready for the 2021 racing season in Indiana.

The final Haynes trainee reaching the finish line first on the day was Madelines Blk Jack. Wilfong secured the top spot early and scored an easy gate to wire win by five lengths in 1:58.3. Imagine It and Joey Putnam finished second over Halle Shark and Joe Putnam for third.

A three-year-old son of JK Endofanera, Madelines Blk Jack was lightly raced last year at two. One of his two wins gave him a career best time of 1:52.2 as a freshman. He was purchased last fall by Jeff Fought Racing and Brian Carsey right before the Indiana Sires Stakes Super Final.

Qualifiers continue at Harrah’s Hoosier Park with the next round set for Saturday, March 13.