There aren’t many sons or daughters of I Scoot Hanover racing anymore, but one gelding is continuing the winning trend. Hawk’s Red Chief, now 11, sored a near gate to wire win Thursday, Jan. 20 at Miami Valley Raceway. 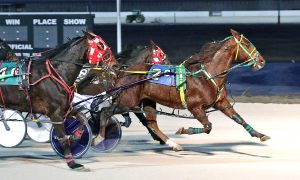 Hawk’s Red Chief, now 11, is two for three in 2022 with his latest win at Miami Valley Raceway Thurs. Jan. 20. Photo by Conrad Photography

Starting from post two, Hawk’s Red Chief and Chris Page left the gate with some speed, but Lazy Jane and Tyler Smith came rallying up on the outside and snagged the first call at the quarter in :27.2. Once the field had settled, Hawk’s Red Chief moved out and around Lazy Jane to take over through the half in :56.4 and 1:25.3. Heading into the final turn Splended Party and Tony Hall led the charge on the outside but Hawk’s Red Chief held strong, fending off horses to his inside and his outside at the wire in 1:54.0 for the win. Beach House and Trace Tetrick finished a half length back in the three-horse photo over Lazy Jane.

Hawk’s Red Chief, the favorite in the $12,500 claimer, paid $2.80 for the win. He is owned by Tessa Perrin and trained by J.D. Perrin. Fred and Carolyn Shiery of Michigan bred the I Scoot Hanover gelding, who is now two for three in 2022. Unraced at two, the gelding has competed in the last nine years and he now has 46 wins in 172 starts and is just shy of a half-million in earnings. His career best time was taken as a five-year-old in 1:49.4 at The Meadows.

Hawk’s Red Chief is a recent acquisition by the Perrins, re-joining their stable in November of 2021. He was claimed off of them in late October before they claimed him back. Overall, during his career, he has gone through 18 ownership changes while racing in the claiming ranks.

Hawk’s Red Chief was one of nine yearlings by I Scoot Hanover that sold in 2012. He was the highest priced of the group at $15,000 and the red colt sold under the name of Red Mischief. He began under trainer Julie Gray and didn’t race in Indiana Sires Stakes action until the age of four. He is the richest of his family, joining half-sisters First Fancy (Arturo) and Second Fancy (Allamerican Native) and six figure earners.

I Scoot Hanover was one of the top Indiana stallions in the first decade of pari-mutuel racing. Overall, he has sired 227 starters with 134 taking records under 2:00 and 67 with records under 1:55. Two of the biggest names by I Scoot Hanover was Freddyscooter from the Steve Brannan Stable and Robin I Scoot from the Dan Perdue Stable. Both took records under the 1:50 time barrier and both made over $850,000 in their careers. His last foals were born in 2013.