Following a recall in the very first race of the season, Harrah’s Hoosier Park got its 27th season of Standardbred racing out of the gate in a big way. The Jera Larkins Memorial for trotters was carded as the first and a longshot blew by the field late in the race to take home top honors. 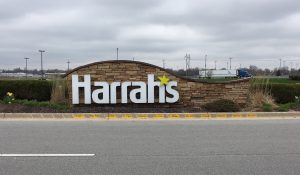 Phabaj and Jared Finn were last early in the race, but were able to follow cover up to the leaders and by the top of the stretch, they had a clear shot to take over, and that’s just what they did, soaring down the stretch in :28.2 to win by three and three-quarter lengths in a time of 1:56.1. Moms Money Maker and Robert Taylor finished second over Celebrate Winning and Trace Tetrick for third. The time of the mile was 1:56.1. All three top finishers had double digit odds adding up to a big payoff for their backers.

Phabaj paid $142.00, $63.40, $17.80 across the board for the win. The Airzoom Lindy three-year-old filly is owned by Finn Racing and trained by Jared’s dad, JD Finn. The mile was a new lifetime mark for the Indiana sired sophomore. Her previous mark of 1:58.4 was taken last year at two at Harrah’s Hoosier Park. It was her first start of 2020 after getting two qualifiers in to prep for her sophomore debut.

Driver Mike Peterson also connected with two winners, the first in the fifth race of the night behind Always Cool in 1:55.3 followed by a big longshot in the sixth race. Beach Wine, trained by Matthew Riggle, sat behind Skylar and Joey Putnam for the mile and was able to move up in the stretch for the win in a time of 1:53.3, a one length advantage over Skylar. Real Sancho and John DeLong finished third.

Beach Wine paid $102.60 for the win. The three-year-old Rockin Image gelding is owned by Scott Linville and lowered his career best mark by nearly 10 seconds with the win. It was his first outing of 2020.

Racing is back in action Wednesday, June 17 at Harrah’s Hoosier Park. A Pick 4 Carryover moves to Wednesday beginning in Race 3. First post is 6:30 p.m.