American Racehorse magazine, based out of Texas, showcases racing of all kinds. IN the Fall 2019 issue of the magazine, Harrah’s Hoosier Park was one of the featured photos from a visit a year ago by a true racing fan Dylan Kerkoff. 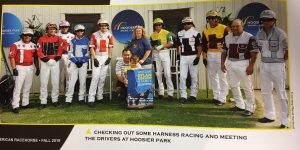 Dylan Kerkhoff was greeted by a group of drivers at Harrah’s Hoosier Park during the summer of 2018. Photo by Mendi Kerkhoff

Dylan and his parents, Mendi and Vaughn, made a trip to Indiana to see both Indiana Grand and Harrah’s Hoosier Park. The residents of Oklahoma have taken an interest through racing  due to their son’s obsession with the sport. Their interest started at Remington Park and from there, they began visiting racetracks across the United States. However, they had never been to Indiana.

Dylan, who has a common form of dwarfism called achondroplasia, is a student of racing by watching TVG constantly at home. As a result, he began developing favorite jockeys, favorite racetracks and favorite horses and that is where Indiana came into focus. He loved watching the races from both tracks in Indiana, so the family planned a trip to see each facility in person in June 2018.

While at Harrah’s Hoosier Park, Dylan was provided with the red-carpet treatment. He rode in the starting gate and ventured to the paddock to meet some of the top drivers. A group photo was taken and was featured in a special article about Dylan in American Racehorse. Dylan is always identifiable as he wears his favorite shirt depicting the outfit worn by Woody from Toy Story.

Now a teenager, Dylan continues to check racetracks off his list as the family continues to schedule road trips. His adventures are well documented on Twitter @woody_tshirt or through a search of #wheresthewoodytshirt.