Hannelore Hanover, the superstar Indiana sired trotting mare, will make the final start of her career Saturday, Nov. 23 in the $175,000 TVG Final. The race is set as the second on the card with an estimated post time of 7:28 p.m. The Meadowlands has planned a special retirement ceremony for her following the race 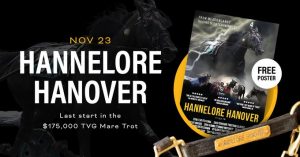 The first 500 fans will receive a Hannelore Hanover poster at The Meadowlands as the superstar mare makes her final start in the TVG Final Saturday, Nov. 23. Photo by The Meadowlands

Hannelore Hanover, 2017 Horse of the Year, has earned more than $3 million during her career and is a two-time Breeders Crown winner. She has also won the TVG Final twice. The Swan for All mare will start from post four in the five-horse lineup at odds of 6-1. Tim Tetrick has been assigned to drive her for the final race for trainer Ron Burke.

The Meadowlands will offer a special Hannelore Hanover poster to the first 500 fans. Her shoes will also be pulled during the winner’s circle ceremony after the race and one will be retained by The Meadowlands to hang in their special “Walk of Fame” for champion horses.

Other Indiana sired horses on the card are Mister Indiana, by Quality Western in Race 1, Post 10 trained by Michael Posner and driven by Vincent Ginsburg, Virgin Storm, a son of Always A Virgin, trained by Chris Marino who starts in Race 3 from post two, Always a Prince, also by Always A Virgin, who starts from post eight in the $350,000 TVG Open Pace Final slated as Race 8 with Yannick Gingras aboard for Trainer Tyler George, and Fiftydallarbill, a son of Swan for All, who will start from post four in the tenth race of the night, the $350,000 TVG Open Trot Final for Trainer Katricia Adams with Corey Callahan driving.