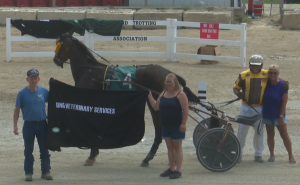 Trained and driven by Doug Rideout, Hand Dover Dan comes into the championship on a three-race win streak. He is eight for 20 this season and took a new lifetime mark this spring in 1:57.2 at Harrah’s Hoosier Park. Overall, he has 13 wins in 36 starts for owners Julie Rideout and Gracie Rosson. A win in the Governor’s Cup Championship will place him well over the $60,000 mark in career earnings.

One of the strongest competitors for Hand Dover Dan will be stablemate Lonestar Fashion, who has drawn the outside post eight. With six wins this season, the Crescent Fashion gelding posted a best time of 1:59.4 this season on the Indiana Sired Fair Circuit (ISFC). Rideout is down to drive both horses in the Championship and a driver change will be announced the day of.

Joining the Rideout duo for the Championship is Summit City Sonny from the Byron Hooley Stable. The Dover Dan gelding has drawn post six and will be guided by Derek Hooley. Summit city Sonny has three wins this season with his fastest recorded in 1:58.0 on the ISFC.

In the three-year-old trotting filly ranks, Rideout will send out a pair of fillies with a big chance at the title. Walk with Me, winner of seven races this year, has drawn post three while stablemate Crescent Beauty, who has 11 wins this year, has drawn post six. But the quickest of the final thus far is Double A Samantha from the John Merkel barn. Merkel will drive the Muscle Massive filly from post five seeking to improve upon the 1:57.1 mark taken at Harrah’s Hoosier Park earlier this year.

The Governor’s Cup Championships will be the main feature in the Hoosier Lottery Grandstand beginning at 6 p.m. A total of eight races are on tap with the two-year-olds featured first followed by the three-year-olds. A total of $200,000 is offered during the Championships. Earlier in the day, the Governor’s Cup Consolation for horses who finished ninth through 16th will be featured beginning at 11 a.m. Consolations will be contested for $10,000 each.