Accompanied by the race call of guest announcer Kevin Mack, Joey Putnam made his presence known with Halle Shark in the seventh race of the afternoon Monday, Feb. 24 at Miami Valley Raceway. The longshot, paying $31.40 to win, won the $12,000 Fillies and Mares conditioned pace by three and one-half lengths in a time of 1:54.2. 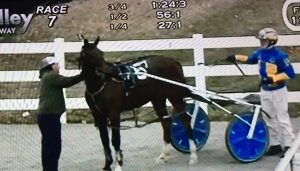 Starting from post five, Putnam was encouraging Halle Shark to use early speed when the gate sprung, getting the job done after the quarter in :27.1. The duo had immediate pressure from the outside form Grimalkin and Tyler Smith, who could never clear to the front. Other opponents began to flip three-wide to challenge, but Halle Shark was too tough, scoring the win over Straightontherocks, another Indiana sired product by Third Straight, and John DeLong. Christina One and Josh Sutton finished third.

It was the fourth start of 2020 for Halle Shark and the first win of the season. The seven-year-old mare by Shadyshark Hanover now has 21 career wins and in excess of $240,000 in earnings. She is owned by Joe Putnam and Suttons Bay Racing and is trained by Putnam. Suttons Bay Racing also bred the mare. Mack noted in his race call that Joey Putnam was back fresh from his vacation in Aruba.

Earlier in the card, Shes Cruising Home went three-wide around the final turn to score a win in the $10,000 conditioned claimer for fillies and mares. The four-year-old Indiana sired daughter of Net Ten EOM, driven by Tyler Smith for trainer Ken Rucker, stopped the timer in 1:57.1. Daniel Lambright owns Shes Cruising Home, who was bred by Michael Schmucker.