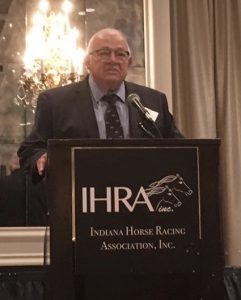 Harold Barnes, shown being inducted into the Indiana Horse Racing Association Hall of Fame at the Columbia Club, was an iconic figure in Indiana horse racing for more than five decades.

Harold, a third-generation horsemen, spent a lifetime in harness racing, participating as an owner, trainer, driver and breeder.  He was successful horsemen who competed throughout North America, from California to Canada to the East Coast, spent the later part of his career racing in the mid-west, primarily in his home state of Indiana.  His accomplishments include winning races such as the Kentucky Sires Stakes, Indiana Sires Stakes, the Fox Stake and driving horses such as Mr. Spunky, Sales Force and most notably Abercrombie. He earned leading driver and trainer titles at Louisville Downs and a training title at Hoosier Park.

In addition to being known as a remarkable horseman, Harold will also be remembered by the love and pride he had for his family.  He was married to the love of his life, his wife of 59 years Kay Barnes, who survives.  Together they had four children, Robert Barnes, DVM, of New Palestine, Beverly Korobkin (Michael) of Indianapolis, Brenda Barnes (Brian Rietel) of Mooresville, and Brian Barnes (Jessica) of Shelbyville; and grandchildren, Mellissa, Lauren, Colin, Mallory, Haylee and Dylan.  He is also survived by his sisters Janet Bozzelli (Bill Gutzwiller) and Marlene Fritz.