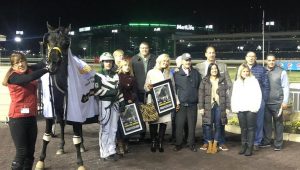 Hannelore Hanover was greeted in the winner’s circle following her final race by her ownership. She heads into the brood mare ranks and will join the band at Hanover Shoe Farm. Photo by Lisa Photo of The Meadowlands

Driven by Tim Tetrick, Hannelore Hanover followed along in mid pack and closed in the stretch with a final panel in :26 seconds to hit the board. Following the race, she was brought to the winner’s circle, draped with a special retirement blanket and greeted by her ownership for a goodbye ceremony. She was conditioned by Ron Burke and began her stakes career at Harrah’s Hoosier Park under the direction of Trainer Jamie Macomber.

Named 2017 Horse of the Year, Hannelore Hanover retires with a career best time of 1:49.2 and more than $3 million in career earnings. She has been sold to Hanover Show Farms to begin her career as a brood mare in 2020. According to a previous story by Standardbred Canada, she will be bred to Greenshoe next season.