Wheelinontheedge, a daughter of Guccio, was the top bid getter at the Michiana Classic Yearling Sale Saturday, Nov. 30 at the Michiana Event Center. A total of 172 yearlings were cataloged for the third annual event. 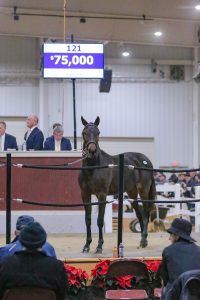 Wheelinontheedge was the sale topper in the third annual Michiana Classic Yearling Sale Saturday, Nov. 30, bringing a price of $75,000. Photo by Dean Gillette

Wheelinontheedge was purchased for $75,000 by Martinez Equine of Paris, Ky. The filly was part of the Oakwood Farms consignment of Montgomery, Ind. and sold as Hip No. 121. She is a daughter of Free Wheeling, who has a mark of 1:56.2 and made more than $200,000 during her career. She is also the dam of several nice trotters, including two-year-old filly standout this season May Baby, who is also by Guccio.

The second highest seller of the sale was a Rockin Image filly, purchased by Brandon Bates as agent for $33,000. Phelgon, Hip No. 97 from the Luckiana Farm consignment, is a first foal from the Bettor’s Delight mare Phillys Delight, who has a mark of 1:57.0.