Grand Swan, the standout three-year-old filly trotter, remained perfect for 2019 with a win in the $47,000 fourth leg of Indiana Sires Stakes action Wednesday, July 24 at Harrah’s Hoosier Park. The daughter of Swan for All trotted home in 28 seconds to make it five for five this season. 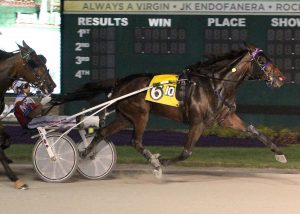 Starting from post four, Grand Swan, the heavy favorite of the seven-horse field, slid over to the rail as Infinity Stick and Sam Widger blazed by the first quarter in :26.3 before backing off the pace to the half in :56.4. Trainer-Driver Lewayne Miller had Grand Swan out and rolling around the final turn and had secured the lead at the top of the lane. In the stretch, Grand Swan opened up on the field for the win by nearly four lengths in a time of 1:54.3. Infinity Stick was impressive for second over Sophia Lia and John DeLong who closed for third.

The second division of Indiana Sires Stakes went to another product of Swan for All as Kota’s Swan scored the win in 1:54.2 with Widger at the controls. Morairtime and DeLong finished second over Haylie Ivy and Ricky Macomber Jr. for third.

The win was a new career best for Kota’s Swan, who is trained by Jeff Cullipher and owned by Pollack Racing LLC and Cullipher. It was the second win of the year in seven starts for Kota’s Swan.