The Governor’s Cup Series came to a close Thursday, Aug. 12 featuring a late morning program of eight races for the consolation brackets. Vying for a purse of $10,000 each, horses who just missed the cut for the championships were in the spotlight with several impressive miles turned in over the one-mile track at the Indiana State Fair. 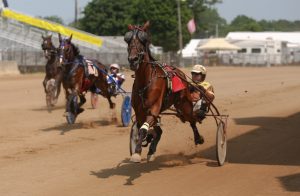 Keith Bourbon, driven by Doug Rideout, is shown at the Elkhart County Fair earlier this year. He scored an impressive win in the sophomore trotting ranks of the Governor’s Cup Consolation Thursday, Aug. 12. Photo by Dean Gillette

Closing out the card was a dominant performance by Keith Bourbon and Doug Rideout in the three-year-old colt and gelding trot. The Guccio sophomore didn’t see the inside path until after the half, sitting on the outside as Charm N Caesar and Jack Kieninger Jr. established the first quarter marker in :30.4 before Keith Bourbon moved up on the outside at the half in 1:01.2. From there, Keith Bourbon eased over to the rail and led the field to the finish line, scoring the win by three lengths in 2:01.3. Woodside Emery and Joey Putnam closed well for second over Skyway Poet and Jay Cross for third.

Keith Bourbon, also trained by Rideout, is owned by breeder Alan White of Fountain City, Ind. The gelding has earned two Indiana Sired Fair Circuit (ISFC) wins this summer and now has four wins overall. His quickest mile was recorded at Hoosier Park in April in 1:57.2. Keith Bourbon now has more than $20,000 in earnings after only starting twice at two.

It was one of two wins on the consolation card for Rideout, who also catch-drove Nasey to victory in the two-year-old colt and gelding trot. Trained by Leander Schwartz, Nasey went straight to the lead, obtaining the top spot just after the quarter in :30.2. He began to draw off from the field, winning by 16 lengths at the wire in 2:00.2, a final panel in :29.4. Singlepose and Michael Myers closed for second over Swan’s Big Dance and Brandon Bates for third.

Nasey is owned by Black and White Stable of Milroy, Ind. Roman Stoll bred the son of Pilgrims Chuckie, who now has three wins in 11 starts for 2021. The mile was his career best effort.

The quickest mile of the day was recorded by Victor Hic and Logan Loney in the three-year-old colt and gelding pace as the duo stopped the timer in 1:55.2. Victor Hic pursued the top spot after the half in :57.0 and was able to fend off late challengers for the win by three-quarters of a length. Always Hangry and Joey Putnam turned in a speedy final quarter to finish second over Vel Gorgeous Sammy and Kevin Lambright for third.

Victor Hic is owned by James Reed and trained by Donna Loney. The Tellitlikeitis sophomore was bred by Blue Bird Farms’ Daryl Miller. He now has five wins this season with the mile in the consolation marking his career best effort.