The launch of the new Governor’s Cup series has been set Thursday, Sept. 10 featuring the finals of the Indiana Sired Fair Circuit (ISFC). The consolation bracket will feature two and three-year-olds on both gates that completed the series ranked ninth through 16 beginning at 11 a.m. The top eight point getters of each division will vie for the $20,000 Governor’s Cup Championships beginning at 1 p.m. at the Indiana State Fairgrounds.

Sleazy Rolls, the leader in points for two-year-old pacing fillies, will be featured in the first race. The Time to Roll filly has won six of 11 starts this year, adding in four seconds. Trained by Joe Putnam and driven by Joey Putnam, Sleazy Rolls has a time of 1:59.0 taken at the Indiana State Fairgrounds earlier this year. She starts from post five.

Joining her as a main contender for the freshman pacing filly title is Always A Miracle from the Matt Rheinheimer barn. The Always a Virgin filly has won seven of eight starts with one second this year. Her quickest time was recorded in a qualifier at Harrah’s Hoosier Park in 1:57.4. Always A Miracle has drawn post eight in the first Governor’s Cup Championship. 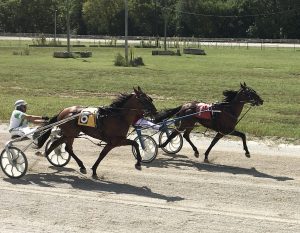 Lil Joe III (inside) and Big Gulp (outside), both representing their names with their stature, will be two of the top eight freshman pacing colts and geldings vying for the $20,000 Governor’s Cup Championships at the Indiana State Fairgrounds Thursday, Sept. 10. Photo by Tammy Knox

The two-year-old pacing colts and geldings will see a big matchup between Big Gulp and Lil Joe III. Big Gulp is eight for eight heading into the $20,000 final. The Always A Virgin gelding took a career best time of 1:53.0 earlier this year at the Indiana State Fairgrounds. Jay Cross drives and trains from post one.

Joining Big Gulp with his sights set on the title is Lil Joe III from the Anthony Gray Stable. Also by Always a Virgin, the petite speedster has finished in the top three nine of 11 starts with four wins. Gray will drive from post seven.

The top point getter in the freshman colt and gelding pacing ranks is This Kit Rocks from the Putnam barn. The Rockin Image son has six wins in 12 starts this year and will start from post eight with Joey Putnam in the bike.

In the freshman trotting colt and gelding ranks, Jessies Outlawed leads the way in points. A winner in five of his 11 starts this season, the Jailhouse Jesse gelding has not finished worse than third. His best time was taken at the Indiana State Fairgrounds earlier this year in 2:02.2. Doug Rideout trains and drives Jessies Outlawed from post five.

Another leading contender in the freshman trotting colt and gelding ranks is J-S Hopscotch from the Jack Myers Racing Stable. The Mr Web Page son has won six of his nine starts for driver Alex Udell. He starts from post seven in the fourth race of the day.

J-S Siesta Tan from the Myers Stable is the top two-year-old trotting filly in points. A daughter of Guccio, she has won eight of nine starts this year with a mark of 2:02.4. Alex Udell drives from post seven in the third race of the day.