A total of $200,000 in purse money was spread over eight finals for the Governor’s Cup Championships at the Indiana State Fairground Sunday, Aug. 15. The top two and three-year-olds on the Indiana Sired Fair Circuit qualified for the event, which was postponed from Thursday, Aug. 12 due to weather. 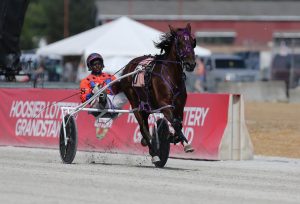 Rockin Bambi and Terry Skinner head to the finish line in the freshman filly division of the $25,000 Governor’s Cup Championships Sunday, Aug. 15 at the Indiana State Fair. (Photo by Dean Gillette)

Kicking off the day was an impressive win by Rockin Bambi from the Terry Skinner barn. The two-year-old daughter of Rockin Image led from gate to wire for the win by four lengths in a time of 1:55.0, a final panel in :28 seconds. Rockin Boogie and Clifton Bell finished second over Stage Lightning and Jay Cross.

Rockin Bambi is owned by Ar’Tarrius Fleming of Mississippi. Skinner drove the filly, bred by Broekhuis Stables and Ernie Hochstetler, to her ninth win in 10 starts for her young career. The mile in the Governor’s Cup Championships marked a new career best for the filly, who now has in excess of $26,000 in earnings.

Rockin Bambi went into the Governor’s Cup Championships tied in points with Velstraightdreamer at 357. She was undefeated in seven starts on the ISFC.

In the two-year-old colt and gelding division, Luckychris and Clint Coy scored the win to bring home the title for trainer Curtis Rice. The standout Luck Be Withyou colt moved toward the lead in the second half of the race and overtook Be a Lucky Star in the final turn before rallying home for the win in 1:55.2. Caches Miracle followed Luckychris to the front and finished second over Jet Wills and John DeLong for third.

Luckychris is owned by D and R Racing Stable of Kentucky. He was second in the point standings to qualify for the Governor’s Cup Championships behind Caches Miracle, winning six events on the ISFC. Overall, he is seven for 11 this season and has only finished back of second one time in his outings. His career best was established in the Governor’s Cup Championships at 1:55.2. He was timed in 1:53.2 at Harrah’s Hoosier Park in early July.

Rheinheimer also trains Luv Lorelei. Alton Miller, Burt Paddock and Kyle Hupfer own the Muscle Massive filly who was fifth in the standings for the Governor’s Cup Championships. She won two events this summer to move to the final.

Hand Dover Dan and Rideout scored a close win in the freshman colt and gelding division. They battled late with Classy Tom and Mike Hollenback to grab the win by a neck at the finish in 2:01.1. Rojo Man, also trained by Rideout and driven by Clint Coy, finished third.

Hand Dover Dan is owned by Julie Rideout and Gracie Rosson. The first crop Dover Dan gelding earned his fourth trip to the winner’s circle with the win in the Governor’s Cup Championships. His mile was also a new career best.

Three-year-olds closed out the program with Payroll Protection and Joey Putnam making a big move in the final turn to pull away to a three-length win in the sophomore pacing filly event. JK’s Shining Star and Doug Rideout finished second over Vel Keep Rolling and Kevin Lambright for third.

Payroll Protection is owned by Brett Wilfong and Joseph Baron. Wilfong trains the Time to Roll filly who earned her first win of 2021 in the Governor’s Cup Championships. Her time of 1:55.0 matched her career best set at two at Harrah’s Hoosier Park.

Driver Jordan Ross scored back-to-back wins in the Governor’s Cup Championships. His first victory came behind Northern Network in the three-year-old colt and gelding pace. Trained by Robert Taylor, Northern Network tipped out at the top of the stretch and drove right now by for the three-length win in 1:52.3, a new career best. Vel Mr Nice Guy and Kevin Lambright finished second over Lil Joe III and Jay Cross for third.

Norther Network is owned by Larry Poindexter of Tennessee. The Net Ten EOM gelding now has four wins this year and eight overall for his connections.

Ross also guided Swan Fine Lady to victory in the three-year-old filly trot. After taking over the lead after the quarter, Swan Fine Lady was a trotting machine, striding home by two and one-half lengths for the win. Heres Devotion and Doug Rideout finished second over Swartz Bros Susie and Joey Putnam for third.

Rocking Meadows Stable owns Swan Fine Lady, who is trained by Mervin Schmucker. The Swan for All filly has won 13 of 26 starts this season. Her final time of 1:58.1 in the Governor’s Cup Championships was a new lifetime mark.

Closing out the card was Alvin Miller and Northern Rocks in the three-year-old colt and gelding trotting ranks. The Guccio gelding, owned by Martin Schmucker, went gate to wire for Miller in 1:56.3. J-S Hopscotch and Melvin Schmucker, finished four and one-half lengths back in second. Jesse’s Swan and Doug Rideout finished third.

Northern Rocks, a homebred by Martin Schmucker, is seven for 18 this year. After going winless at two, he now has more than $38,000 in earnings and his time at the Indiana State Fair marks a new career best.

The second session of the ISFC begins Wednesday, Aug. 18 at Converse. The finals will be held Oct. 9 at the Jay County Fairgrounds.