Former Two-Year-Old Pacing Filly Champion Goose’s Weedie added another win to her credentials Tuesday, Feb. 26 with a win against open competitors at Miami Valley Raceway. The now five-year-old daughter of Dontgetinmyway scored the win by a neck over Avila Beach and Trace Tetrick for the victory in a time of 1:53.2. 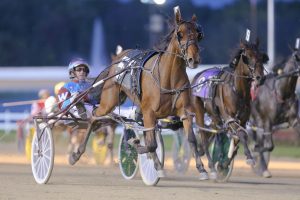 Goose’s Weedie, who is now two for four in 2019, is shown winning the Indiana Sires Stakes Super Final during her two-year-old season at Hoosier Park with Sam Widger in the bike. (Photo by Dean Gillette)

Driven by Josh Sutton, Goose’s Weedie now has two wins in four starts for 2019 for owner-breeder Charles Kline of Middlebury, Ind. The pacing mare is trained by Mike Hollenback and now has 11 wins in 68 career starts for earnings in excess of $236,000. Her best time of 1:52.0 was taken at Hoosier Park during her three-year-old campaign.

On Monday, Tetrick continued his dominance at Miami Valley, scoring seven wins on the 14-race card. Tetrick won the driving title in 2018 and is poised to secure a repeat in 2019 as he leads all drivers once again in the win column.