Fresh off a recent evening where three Larry King-trained horses received year end honors at the Indiana Standardbred banquet, another one has emerged as a winner. Vel Goodgollymolly scored her first career win at Miami Valley Raceway Tuesday, Feb. 8. 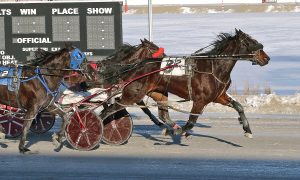 Vel Goodgollymolly and Cameron McCown turned in a gate to wire effort to break her maiden Tuesday, Feb. 8 at Miami Valley Raceway. Photo by Conrad Photography

Driven by Cameron McCown, Vel Goodgollymolly was the favorite in the field and took control early, rallying to the lead to set fractions of :29.4, 1:01.3 and 1:30.1, keeping three lengths between her and the rest of the field. As the field turned for home, the late closers began to kick in and bridged the gap, approaching Vel Goodgollymolly at the wire, but she held on gamely for the win in 1:59.4. Girl Shezarockin and Jeremy Smith finished in a dead heat for second with Good Gravy and Brett Miller.

Vel Goodgollymolly is trained by Larry King and owned by King Racing Stable of Ohio. The three-year-old Hypnotic Blue Chip filly earned a new lifetime mark in the race. After going unraced at two, the filly has started twice at Miami Valley, finishing third in her racing debut last week. The homebred filly is out of the Mark Johnathan mare Marks Molly, who took a mark of 1:54 during her career and made $42,000. Vel Goodgollymolly is only one of two foals of racing age. She has a full sister, Vel Molly Blue, that is a two-year-old in 2022 and a yearling half-sister, Vel Molly’s Girl, by Ponder.

Also a winner on the card was the tough claiming mare M E Radar Girl from the Tyler George barn. The nine-year-old Radar Sign mare moved to the lead at the half in :58.0 and never looked back, scoring the win in 1:54.4 with Trace Tetrick in the bike. Dancing Lisa and Chris Page finished second over Glenferrie Bronte N and William Mann finished third.

M E Radar Girl is owned by SCP Stable of Georgia and George. Lester Schmucker bred the mare, who is now three for four in 2022. Overall, she has 53 career wins and in excess of $340,000 in earnings. Her career best time was taken as a seven year old in 1:51.1 at Harrah’s Hoosier Park.