It was a good day on the track for Guccios Thursday, Jan. 21 as Celebrate Winning was a winner at The Meadows and Northern Skyway picked up a win at Pompano Park. The trotters each won their first race of 2021. 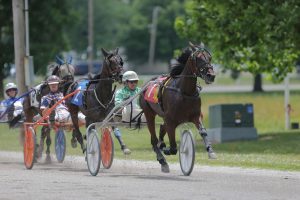 Celebrate Winning, shown leading the way at Frankfort in 2019 for former trainer-driver Jay Cross, earned her first win of 2021 at The Meadows Thursday, Jan. 21. Photo by Dean Gillette

Making her third start of the year, Celebrate Winning was the first to conquer her opponents at The Meadows. The five-year-old mare rallied out to the lead from the gate, securing the top spot just after the quarter in :28.0 for driver Dan Rawlings. From there, the duo controlled the tempo, leading the conditioned trot for the remainder of the mile, holding off a late charge by Barn Tease and Tony Hall to win by a neck in 1:57.1. Syrinx Minx and Dave Palone finished third.

Celebrate Winning paid $7.40 for the win. She is owned by Indiana’s Brian Carsey and Maynard Miller and was bred by Victory Hill Farm Inc. The former Indiana Sired Fair Circuit contender won her 14th career race and now has in excess of $67,000 in earnings. The mile also equaled her career best, matching her record taken last year at four at The Meadows.

Later in the day, Northern Skyway was also making his third start of the year and turned the performance into a victory at Pompano Park. Guided by David Miller, Northern Skyway floated away from the gate in mid pack as Royaltys Odyssey and Tyler Shehan set the early fractions of :27.4 and :57.4 before going off stride. Northern Skyway had been flushed out first over by the half and capitalized on the mistake, moving onto the lead at the three-quarter mile marker in 1:26.2. At that point, Miller had the six-year-old gelding in full gear, trotting away from the field by eight and one-quarter lengths at the wire for the win in 1:55.4. Legend Field and Corey Braden finished second over Bazaar Bazaar and Joseph Chindano Jr. for third.

Northern Skyway was the favorite of the field, paying $2.80 to win. He is owned by William McElvain Jr. of Maine and trained by James Dunn. Northern Lane Farm of Grabill, Ind. bred the gelding, who now has 22 wins in 105 starts with earnings in excess of $200,000. His career best time remains at 1:54.3, taken as a four-year-old at The Meadows.

Guccio, who stands for $1,500 at Yoder Equine in New Paris, Ind., was sold two years ago into the driving horse industry, but continues to breed some Standardbreds. The son of Yankee Glide had a big year in 2020 and finished second behind Swan for All in total earnings for all trotting sires in the state of Indiana. Last year, he bred 91 compared to 2018 and 2019, when he only bred 43 mares. Starters from Guccio in 2020 earned nearly a half-million dollars, with a majority of the earnings coming from three-year-olds last year. May Baby led the way among sophomore trotters, winning the Indiana Sires Stakes Super Final in the fall. His oldest foals are six-year-olds in 2021. In all, his foals have earned in excess of $5.3 million with 16 taking marks of 1:55.0 or under.