The $22,000 Open Pace at Harrah’s Hoosier Park was stocked full of talent Friday, July 29 with six of the seven entrants taking records under the 1:50 time barrier this year. Also, six of the seven have won at least four races this season setting the race up for a great performance, with Goldie’s Legacy and Sam Widger earning the win in 1:49.1. 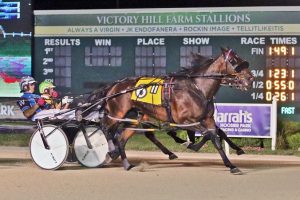 Goldies Legacy and Sam Widger used a quick final quarter to score the win over Mac’s Big Boy and Trace Tetrick (inside) in the Open Pace at Harrah’s Hoosier Park Friday, July 29. Photo by Dean Gillette

Starting from post six, Goldie’s Legacy rallied out and got the spot right behind early leader Mac’s Big Boy and Trace Tetrick, who reached the front just after the quarter in :26.1. From there, Mac’s Big Boy held a strong hold on the lead through fractions of :55.0 and 1:23.1. In the stretch, the tempo picked up and Goldie’s Legacy tipped out and went to work, pacing home in :25.3 for the win by a neck over Mac’s Big Boy. My House and Andy Shetler finished third.

Goldie’s Legacy paid $6.00 for the win. The son of Always a Virgin earned his sixth win of the year in 14 outings and has more than $112,000 in earnings just in 2022. Jeff Cullipher trains the four-year-old who took his career best time of 1:48.4 earlier this summer at Oak Grove. Pollack Racing and Cullipher purchased the gelding as a yearling from the Dave M. Yoder consignment under the name Tenex.

Goldie’s Legacy was the sixth highest priced son of Always a Virgin that year, bringing $35,000 in the Hoosier Classic Yearling Sale. His dam, Ag-N-Au Bluegrass (pronounced silver and gold) was an Indiana Sires Stakes winner of more than $300,000 during her career. Besides her first foal, she is a 100 percent producer and has another foal, Au D Lox Bluegrass (pronounced Gold D Lox) with a mark of 1:49.2. Her three-year-old this season by Downbytheseaside has a mark of 1:52.3. She has a weanling named Hinkston Fireball, a filly by Rockin Image.