Golden Paradise, the 2019 Indiana Sires Stakes Pacing Mare Champion, turned in a dominant performance at Scioto Downs Saturday, May 16. She was part of the 16-qualifier program set for the day as Ohio prepares to resume racing next weekend. 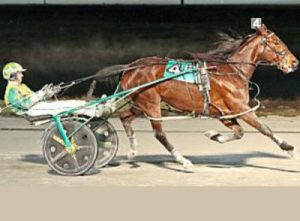 Trained by Tyler George, Golden Paradise shot straight for the lead from the start for driver Aaron Merriman, leading the way through the first fraction of :28.2. The six-year-old daughter of Allthatgltrsisgold was overtaken at the half by another Indiana sired horse by Real Desire, U’ll Learn and driver Shawn Barker II, and was forced back out at the three-quarter mile marker before taking over again and extending her advantage to six lengths at the finish in 1:54.2, a final panel in :28.1. Letme Fly Low, a son of Rockin Image, and Trevor Smith finished second over Western Secret A and Chris Page for third.

It was the first start back for Golden Paradise since January. She won two of her three starts at Miami Valley in the Fillies and Mares Open before taking a break. Owned by Sam Schillaci, Wrenn Jr. Racing and George, the mare now has 30 career wins in 87 starts and purse earnings over $262,000. Her best time of 1:50.2 was taken last spring at Miami Valley.

Other Indiana sired winners on the day included a pair of horses by Rockin Image. General Dolan, a five-year-old gelding, was driven to victory by Devon Tharps in 1:52.3 while Rock the Baby and Josh Sutton won their qualifier in 1:56.4.