In only his second career start, Gold Star Sven rallied to his first career win in two-year-old pacing action at Harrah’s Hoosier Park Thursday, July 22. Driven by James Yoder, the freshman stopped the timer in 1:53.4. 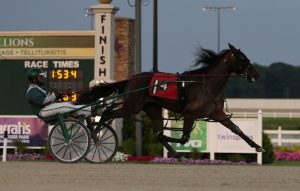 Starting from post one, Yoder got Gold Star Sven out of the gate with enough speed to sit right behind early leader Whatstrublnudragon and Michael Oosting. Fractions of :28.4, :57.4 and 1:26.3 were posted on the board before God Star Sven moved to the outside to challenge. The Hypnotic Blue Chip gelding paced home in :26.4 and pulled away to a two and one-half length win. Whatstrublnudragon finished second with Ponda Luck and Sam Widger rounding out the top three.

The top three finishers were not favored in the field with Gold Star Sven paying $10 for the win. He is owned by Gold Star Farm and was bred by Marianne Audley. Margaret Audley trains the gelding who finished third in his racing debut in early July.

Earlier in the evening, Townline Luckysoul and John DeLong won a two-year-old maiden for filly pacers. The Luck Be Withyou daughter closed in for the win in 1:55.1 as a longshot in the field. Goldies Rockin and Ricky Macomber Jr. finished second over The Turning Point and Atlee Bender for third.

Townline Luckysoul was also making her second career start for trainer Al Tomlinson. She is owned by Tomlinson and David Kemp. The filly was a $10,000 purchase from the Michiana Classic Yearling Sale last fall. Gary Miller bred the first crop Indiana sired filly.