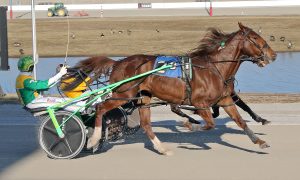 Givemeonemoreshot and Trace Tetrick rally up on the outside to score the win in a tight photo Wednesday, March 9. Photo by Conrad Photography

Givemeonemoreshot started from post two as Pumpkinspicelatte and Jeremy Smith moved toward the lead on the outside. Traffic built up at the quarter in :28.2 and a horse going off stride caused some interference to several horses, including Givemeonemoreshot. By the time the half had arrived, Cenalta Diamond and Tony Hall had taken over the lead and GD Rockin Kay and Sam Widger were left on the outside in first over fashion with Givemeonemoreshot right at her back.

As the field passed the three-quarter-mile marker in 1:25.3, Cenalta Dimaond still had the lead. Down the stretch, Givemeonemoreshot picked up the pace and rallied by for the win, getting the advantage by a head in 1:54.2. Cenalta Diamond finished second over GD Rockin Kay for third, another Indiana sired mare.

Givemeonemoreshot paid $5.80 for the win. The Shadyshark Hanover seven-year-old was bred by Menno Lengacher and trained by Tyler George. She now has 24 career wins in 117 starts with earnings over $100,000. Her career best time was taken as a five-year-old in 1:52.2 at Harrah’s Hoosier Park.

It was the second start for Givemeonemoreshot and her new connections after being claimed from a race in mid-February. Breana Carsey, the teenage daughter of longtime horseman Brian Carsey, has done well as an owner in harness racing. She was the owner of the Ohio Sires Stakes champion MJB Got Faith, who was featured on a CBS Sunday Morning segment about being a young owner in the horse racing business. Breana is also active in the show horse ring and has now ventured into youth reining, which takes her to shows all across the central part of North America.