Dean Gillette has been the official photographer for the Indiana Standardbred Association over the past several years. Now, he will take his talents full time to Harrah’s Hoosier Park once racing resumes. 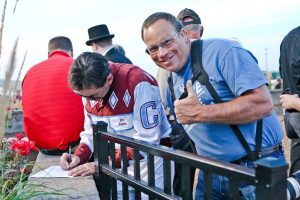 Dean Gillette has become a fan of Standardbred racing along with perfecting his photography. He is shown getting an autograph from John Campbell while taking pictures at Harrah’s Hoosier Park in 2015. Photo by Gillette Photography

A native of Kalamazoo, Mich., Gillette grew up in Standish, Mich. and was introduced to harness racing by attending races with his grandmother and later went to the races at Saginaw when he was in high school.

Dean spent most of his career as a professional paramedic and firefighter. He worked in the Lansing and Battle Creek areas and continued to enjoy his passion for photography. He eventually took a job in LaGrange, Ind. as the County EMS director and rented a house on Junior Christner’s farm.

A full story on Gillette’s path into Standardbred racing is featured in the May issue of the Indiana Standardbred Magazine, which is due in homes this week. The magazine is also filled with his work.