A total of 23 races have been carded for the next round of Indiana Sired Fair Circuit (ISFC) action Wednesday, July 8. The program begins at 11 a.m. and will extend five and one-half hours with an estimated completion time of 4:30 p.m.

Three divisions of two-year-old filly pacers will kick off the card with a lot of new faces in the mix with those that got a start over the past weekend at Converse. Gingerbred Girl seeks to make it two in a row in the first division. The Fred and Ginger filly, trained by Robert Taylor, was a winner at Converse in 2:01.2. Jordan Ross is scheduled to drive from post seven on the second tier.

Two winners from Converse will face each other in the third division of two-year-old colt and gelding pacers in the sixth race of the day. Ultimaroca, a Rockin Image colt from the Charlie Conrad Stable, was a winner at Converse in 2:01.0 and has drawn post one with Conrad aboard. Go Randy Go, also by Rockin Image, was a Converse winner in 2:01.2 and will be guided from post three by trainer-driver Mike Peterson. 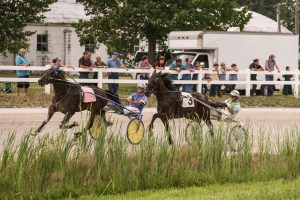 Classy Prince and Joe Putnam move on the outside of Eagle C Fortythree and Jay Cross at Converse Sat. July 4. Both horses are back in to go at Portland Wed. July 8 in separate divisions. Photo by Dean Gillette

The three-year-olds will close out the program with Classy Prince seeking his third win in four starts for 2020 in the second division of sophomore trotting colts and geldings. The lightly raced son of Class Included last year won a start at Harrah’s Hoosier Park in 1:59.3 before heading to the ISFC and picking up a win at Converse. Joey Putnam drives the gelding from post one for his father, Joe, who is the trainer.

The final race of the day also has a multiple winner in the mix. Jekyil N Hyde from the Jay Cross Stable seeks his third win of the year in four outings. The Whom Shall I Fear gelding was a winner earlier this summer at Harrah’s Hoosier Park in 1:58.2 and also picked up a win at Converse. Cross will drive the sophomore from post three in the 23 and final race of the day.